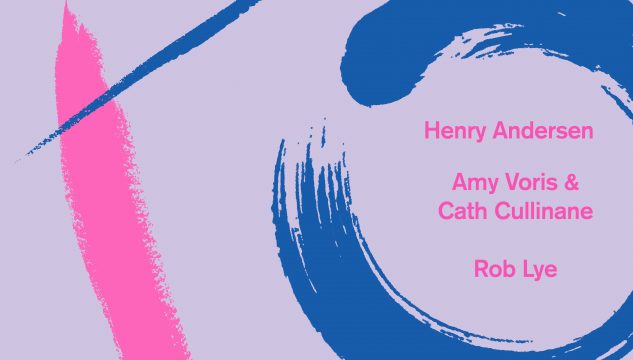 HENRY ANDERSEN
is a Brussels-based artist and composer. Coming from a background in minimalist and structural composition, he gradually moved into written text and visual art. In his performances, Henry works mostly with spoken text, repeating and gradually changing words until the material of the language comes forward and begins to threaten the easy reading of the words themselves. In his debut album for KRAAK, ‘Stanzas’ or ‘The Law of the Good Neighbour’, Henry documents a year long process where pairs of friends read simultaneously from an ongoing text by the artist. The text at one documents the difficulty of this seemingly simple task and the changing conditions of the artist as he continues to write over many years.

AMY VORIS & CATH CULLINANE
Cath Cullinane’s practice is concerned with the movement potential of non-theatre light sources. Originally from Liverpool, she has worked as a lighting designer and performance technician for over twenty years, in theatres, colleges and festivals in the UK and Europe.
Amy Voris is a dance-maker based in Manchester. Her practice is process-oriented and collaborative, driven by the desire to develop relationships with people and with movement material over long stretches of time.
www.amyvoris.com
James Buchanan is currently studying to complete his doctoral thesis in computer-assisted composition at Middlesex University. In collaboration with choreographer Amy Voris, he has created electronic scores for several dance works that have been performed in London and abroad.

ROB LYE
is a visual artist & electronic musician based in London. He is spending September in residency at Outpost Gallery in Norwich, and will be presenting some of the musical fruits from this time in his performance. Lye recently released ‘Ink’ on Stairwell Editions, his debut solo album of golden-hued electronic minimalism.