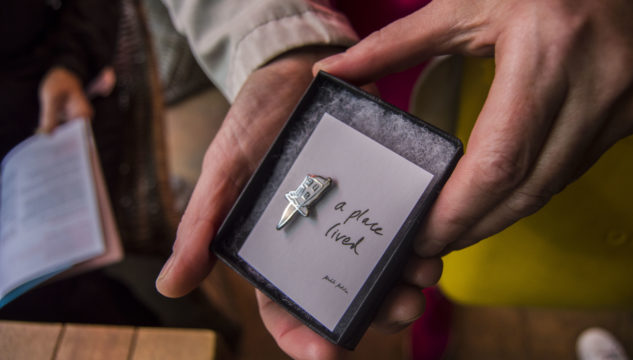 One-hundred of the individually numbered and boxed pins were produced and just 30 pins are now available to buy for £30 each (+postage). To buy a pin please contact us on info@castlefieldgallery.co.uk or 0161 832 8034.

a place lived by artist Maddi Nicholson who lives and works in Cumbria, is a series of playful cast iron enamelled sculptures that invite us to reflect on those who shaped Spinningfields in the 1800s. The sculptures bring to life the stories of people who occupied the area when it was packed with terraced housing, providing homes for workers in the industries operating close by at the time. It’s often said of Spinningfields that there was ‘nothing there’ before the now thriving financial district was built, but this is far from the truth.

Present day residents, workers and visitors to Spinningfields are able to view and interact with the series of sculptures, each one located on the site where its corresponding house once stood. The sculptures visually tell the stories of the past occupants of the houses they represent, including Martha Barry a ‘Washerwoman’, Maria Spencer ‘Keeper of the Mangle’, and Martha Harrison the ‘Knocker Up’.

In developing a place lived, Nicholson has mined census and archive materials, and worked with teams of specialists up and down the country to produce the final works.

The website for a place lived will invite people to delve more deeply into the rich history of Spinningfields and its historic communities, as well as share further information on Nicholson’s research and production process for making the works.

a place lived by Maddi Nicholson will remain on permanent public display at Hardman Square, Spinningfields.

a place lived has been co-commissioned and produced by Katie Popperwell and Castlefield Gallery for Spinningfields Estates Ltd.

a place lived has received additional support from public funding via the National Lottery through Arts Council England.