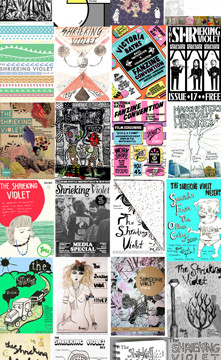 In August 2009, Manchester writer Natalie Bradbury took her art and culture blog the Shrieking Violet off the page to expand into a print edition, providing an ‘alternative guide to Manchester’ and a place to ‘read about the type of things which aren’t written about elsewhere or which might be overlooked otherwise’. The publication, initially photocopied then hand-folded and left to freely pick up in bars, libraries, shops, cinemas and cafes, aimed to prompt residents of Manchester to rethink the way they saw and experienced the city around them.

Each is cover designed by a different artist or illustrator, and the ‘zine has featured researchers and specialists, hobbyists and enthusiasts paying tribute to sorts of arcane and obscure subjects. From Fingland’s buses to Metrolink trams, wooden rollercoasters to football terraces, Manchester’s never-realised underground railway to under-noticed or at-risk public murals and sculptures, railway arches to gargoyles and grotesques, buskers to photocopier art, over the course of twenty three issues the Shrieking Violet has shone an alternative light on art, life and culture in Manchester and beyond.

Issue 23 is no exception, featuring the (almost) forgotten stories of a group of 1930s Basque children in Salford, the ‘secret history of the synthesiser’, female and transgender masculinities in art, a set of photographs of a selection of the many and varied former Co-operative buildings across Greater Manchester which are now finding new uses, and the latest in a series on ‘Mental health at the movies’, along with illustration, poetry, comics and food.

On Thursday August 14, the Shrieking Violet ‘zine will celebrate its milestone fifth birthday with cake and cocktails at Castlefield Gallery. Designer and curator Robert Carter, who designed the cover of the current issue, number 23, as well as contributing a drawing with fellow Manchester artist Monty, is one of the artists currently on show in Castlefield’s exhibition I Would Like to Join A Club and Hit Myself With It, which will also be open to view on the night.

Print copies, from a limited edition of 100, will be available to purchase on the night costing £2.