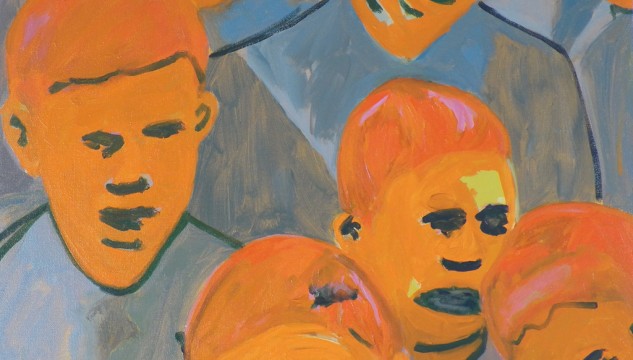 Showcasing work by three artists from the CG Associates membership scheme, Ocean House features the paintings of Anne Parkinson and Jude Macpherson, accompanied by a series of works by Darren Nixon exhibited in Scotscroft.

For the launch event, filmmaking collective Bokeh Yeah! will be hosting a screening of poetry films produced in collaboration with Comma Film.  The event will also feature readings from poets Chanje Kunda, Adrian Slatcher, Anna Percy, and Janet Rogerson.

The exhibitions are presented on a new display system specially commissioned by Castlefield Gallery for New Art Spaces, designed and built by artist and fabricator James Alderson.

Darren Nixon focuses on what Virginia Woolf described as ‘moments of being’ – moments which, despite their ordinariness, seem charged with meaning and significance. His work is filled with narrative but resilient to any attempts to extract any clear story or message, often cropped to the point of illegibility.

Jude Macpherson pursues a preoccupation with the infinite and its revelation through the use of image manipulation, capturing patterns in nature that seem to replicate on both micro and cosmic scales.

Anne Parkinson implements pre-planned systems in her work, letting the methodology control the composition of the painting. The devices she implements encompass systems, rules and mathematical processes, which paradoxically create an unpredictability and indetermination in the outcomes.

Bokeh Yeah! is a monthly networking group for filmmakers who work predominately with DSLR cameras. The group looks into the processes of filmmaking, sharing experience, camera knowledge and demonstrates various kit and techniques. It also showcases and critiques films that are being made using DSLRs.

Castlefield Gallery’s vision is for the North West to be a place where artists can live and produce work while presenting their work in national and international contexts. Its mission is to nurture talent, explore cultural trends and deepen our audience’s relationship to contemporary art.

New Art Spaces provides pop-up spaces for emerging talent in the North West in which to develop their creative practice at very low cost.

Find out more about New Art Spaces at: castlefieldgallery.co.uk/newartspaces/

CG Associates is a membership scheme for artists, writers and independent curators working in contemporary art.  It was initiated by Castlefield Gallery to support members in developing their work and careers by providing information, skills, opportunities, resources, promotion and critical dialogue.

The CG Associates scheme acts as a hub, bringing together artists, curators and writers, facilitating critical exchange and engagement with members’ work and strengthening the artistic ecology of the North West. Find out more about CG Associates at: castlefieldgallery.co.uk/associates