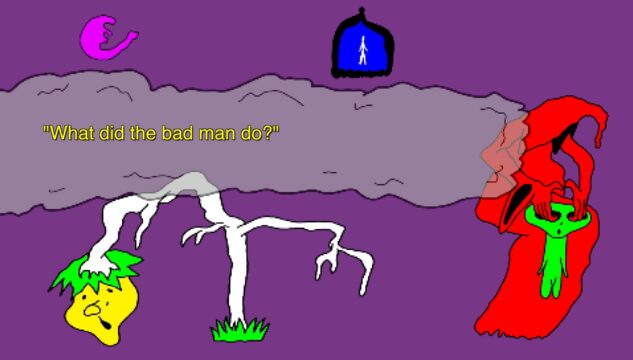 Sardonic Harmony is a collaborative lyric video featuring writing and sound by artists Hardeep Pandhal, Roy Claire Potter, Stefan Sadler, and David Steans. Pandhal was invited by Castlefield Gallery to make a new work to be presented online coinciding with the inaugural exhibition of the Manchester Hip Hop Archive; a heritage project that preserves and celebrates the history of Manchester-based rap music and hip-hop culture.

The artists involved in Sardonic Harmony are friends and have many shared interests in particular in ‘fictioning’: an open-ended practice of storytelling, using multiple mediums and methods to summon counter-narratives and subjectivities, with the aim of anticipating or suggesting potential new ways of living. Pandhal asked his collaborators to respond to the loose themes of ‘mutation’, ‘change’ and ‘untapped potential’, which he suggestively outlined in his opening, elliptical verse. Pandhal believes his preference to work with suggestive or elliptical text and voice in his work has arisen from the lack of direct verbal and textual communication he is able to have with his mother who speaks Punjabi whilst Pandhal’s first language is English. He feels this method helps him to identify more confidently who his allies are and who is willing to engage with him ’on a level’. The first step, he says, ‘is to ask thoughtful and considerate questions, to be an active receiver of my work, to risk filling in the gaps’. As with a lot of hip hop music there is an over lapping of personal, and political references, situated in a specific cultural context. The advantage of a lyric video is that the words are clearly displayed but like many rap songs the references may be obscure for some listeners. A quick look online may do the trick but in some cases the artist may have created something which is left open for listeners to make their own interpretation.

Sardonic Harmony embraces inexplicable forms of otherness, such as the cosmic macabre, through deep, empowering word-based play, sonic re-storying and limited animation. It is a rare and honest work that testifies to the artists’ faith in practices of mutative thinking and collaboration. The artists who have inputted into this work have done so from different perspectives informed by their diverse art practices. Roy Claire Potter works between performance and experimental writing to think through the production of subtext in speaker-listener interactions, which they extend to encounters with ‘voice’ on both the page and in recordings. David Steans’ specific interests/ambitions include conjuring a sense of (genre) horror in and around the technologies, media and processes of cultural production (such as writing and filmmaking). Likewise, the work of cartoonist Stefan Sadler deals with political topics such as war and death, issues fraught with social complexities and humour. Applying practices of associative thinking, often through the visual language of ‘gutter media’, such as comics and video games, Pandhal’s research-led projects exhibit what he describes as ‘syncretic strains of post-brown weirdness’.

‘It could be said that these artists are equally fuelled by an unspoken force that propels them to think for themselves and question authority. What could it be? They complain a lot about issues that annoy them, such as the constitution of social status. They want to send a message to the gatekeepers of taste and conformity. Sardonic Harmony is but one nugget of their burgeoning global message’ – Hardeep Pandhal 2021

Hardeep Pandhal and David Steans discuss the commission with Dr Alex Mason (Faculty of Arts & Humanities, Knowledge Exchange Project Manager at The University of Sheffield) who recently organised a conference exploring the relationship between Hip Hop and Higher Education.