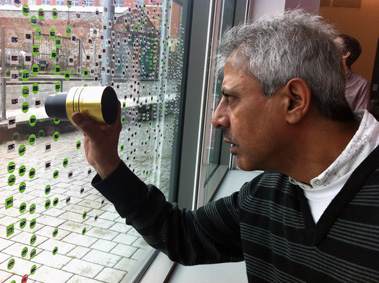 Castlefield Gallery is delighted to have been able to support artist Dave Griffiths with Extinction Event, a new installation commissioned for the Phoenix cafebar windows at Phoenix, Leicester. Extinction Event is a window vinyl & E6 film, 4812 x 1800 mm and draws on an earlier archive project (Griffiths Cue-Dot Observatory, 2006-10) in which Griffiths observed, collected and catalogued 1,900 cinema cue-dots from terrestrial TV broadcasts

Cue dots are circular flashes of light appearing at the outer edges of celluloid reels, with durations of 166 ms (or 4 frames). These indicate momentary voids – in time, space and narrative – as film projectionists perform changeovers between movie reels. Digitisation is gradually erasing cue dots from cinema history.

Over the year of its installation, Phoenix visitors are invited to repeatedly visit Extinction Event, enacting the durational observation and speculation inherent to the processes of both astronomy and cinema. Viewers can bring their own magnifiers to investigate a map of tiny embedded cue-dot images. In navigating and optically uncompressing its details, they will observe light over time, in gestures that echo both space science and archival research.

Dave Griffiths has drawn inspiration from a short residency with the University of Leicester’s X-ray and Observational Astronomy Group, which studies radiation from distant gamma-ray bursts – among the most violent and epoch-changing events in the Universe.

Dave Griffiths – Artist’s Talk
Phoenix Seminar Rooms, 2nd May, 6.30pm
Join Dave Griffiths for an insight into his use of microfilm in Babel Fiche, and how the creation of Extinction Event has been shaped by his residency at the University of Leicester’s X-Ray and Observational Astronomy Group. Free – contact box office on 0116 242 2800 to reserve your place