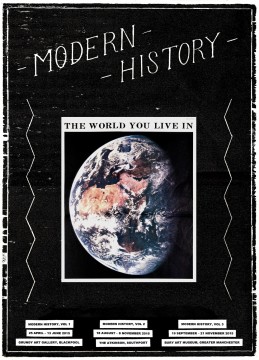 Funded by Arts Council England, Art: ADDS is a two-year project that uses and develops skills, knowledge and expertise in the North West to improve the ability of visual arts organisations to build upon and increase audiences and is structured around three interconnected priorities: critical writing, artist development and young people.

Castlefield Gallery’s Director, Kwong Lee, alongside University of Salford Art Curator Lindsay Taylor, as co-chairs of Contemporary Visual Arts Manchester (CVAM) have played a leading role in developing the project, especially around the artist development strand of work – a series of 3 exhibitions Modern History Vols. I, II and III. These are a distinct group exhibitions, guest curated by internationally respected curator Lynda Morris, who has selected new commissions and existing works by national and international contemporary artists based in the North West. By taking the theme of ‘Modern History’, the exhibitions offer perspectives on cultural, social, and political change, from artists across different generations, with works reflecting on local and global issues, largely post-1969 to the present day.

As Co-Chairs of Contemporary Visual Arts Manchester, we are delighted to launch the second and third instalments of the Modern History exhibitions at the Atkinson and Bury respectively.  Lynda Morris has carefully considered the background and locale of the host venues, the vast array of artistic talent within the region, and the subject of Modern History to curate three very different exhibitions.  Her rich selection of artworks, by artists from across the region and at all stages of their careers, provide a refreshingly different perspective on the art ecology in the NorthWest, and rightly places it within the wider international context. Lindsay Taylor, Art Curator, University of Salford and Co-Chair, CVAM

The Art: ADDS project has also included a critical writing programme and bursary scheme. Delivered in partnership with Manchester Metropolitan University and University of Central Lancashire, through the In Certain Places scheme (incertainplaces.org), alongside four leading critical writing platforms in the North West – The Double Negative, Creative Tourist, Art in Liverpool, and Culture on a Shoestring, a cohort of emerging writers have been paired with specialists in the fields of writing, publication and distribution including; Joanne Lee, Chris Sharratt, Bob Dickinson, Gerrie Van Noord, Sophia Crilly and Laura Robertson. Just some of the reviews coming out of the programme include:

Vibrating pads and gargling salt water, Amelia Crouch reviews Lucy Beech’s Me And Mine at the Harris Museum, Preston for The Double Negative.

Girls on film, Lauren Velvick reviews Lucy Beech’s Me And Mine at the Harris Museum, Preston for CreativeTourist.com.

LaunchPad: It Was A Dark And Stormy Night — Reviewed by Naomi Cull for The Double Negative.

More on CVAN and the Critical Writing Programme at cvan.org.uk