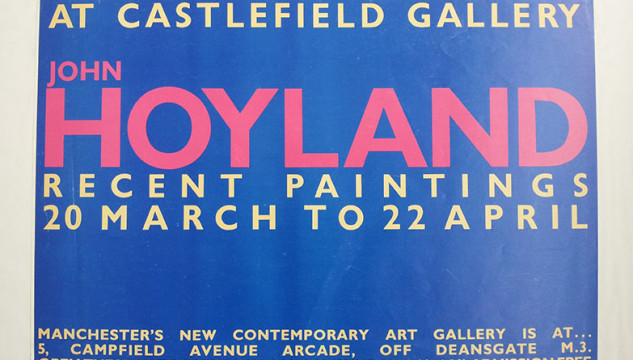 Thirty years ago today Castlefield Gallery opened it’s doors to the public with an exhibition of paintings by the late John Hoyland, an artist who was widely recognised as one of the greatest abstract artists of his time.

Founded by artists in 1984, Castlefield Gallery began its life on Liverpool Road, in the building what is now Don Marco’s Italian restaurant.  The gallery moved to its current home on Hewitt Street in 2002 thanks to an Arts Council England Capital Lotteries Grant. And in August 2012, a re-branded CG re-launched after some refurbishment work with a renewed vigour for artist development, launching Castlefield Gallery’s New Art Spaces and our CG Associates membership scheme.

The organisation continues to go from strength-to-strength, last week launching its flagship New Art Spaces Federation House in Manchester city centre, CG Associates growing to over 120 members and a curated exhibitions programme that continues to gain critical acclaim and draw in more and more visitors.

“Castlefield Gallery’s vision is for the North to be a place where artists can live and produce work, while presenting their art in national and international contexts” says Castlefield Gallery director, Kwong Lee “The same energy and entrepreneurial spirit that started Castlefield Gallery in 1984 continues to this day within the current CG team and runs through everything that we do. It also seems apt that we currently have an exhibition of works by Iain Andrews, an artist who, in my opinion is possibly one of the best painters of his generation”

Watch this space for some exciting announcements about our big anniversary celebrations that will be taking place later in the year.