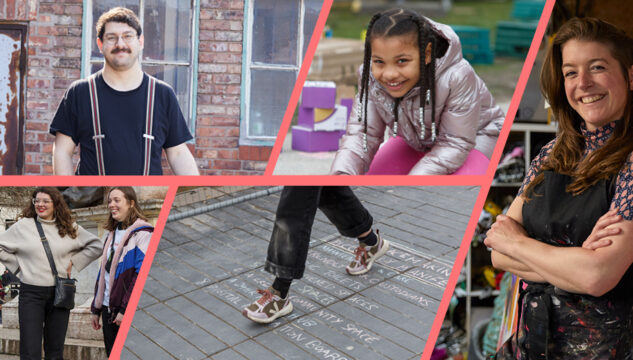 Join artists across Manchester in one amazing day celebrating art and creativity.

Art Assembly is a free one-day festival of art, brought to you by Art Fund with some of Manchester’s leading arts organisations including Castlefield Gallery, HOME, Manchester Art Gallery, The Whitworth and The Manchester College.

The theme of this year’s festival is ‘City as Art School’. With new work by Greater Manchester artists popping up around the city, everywhere will become a spot for creative learning. And everyone’s invited!

Start the day with Meet Me at Art Assembly

Join comedian Russell Kane and writer/theatre-maker Testament, at HOME in Manchester for a live recording of the award-winning podcast Meet Me at the Museum. This special edition – ‘Meet Me at Art Assembly’ – is dedicated to the festival and will feature participating artists Raheel Khan, David Blandy, and Olivia Glasser, who’ll be sharing their thoughts on the theme ‘City as Art School’, and showcasing their work live on stage. Enjoy a sound installation inspired by the Wizard of Oz, an insight into what children really think when the adults are away, and an interactive piece that reimagines Manchester 8,000 years into the future. Plus, Testament will be performing a new spoken-word piece, especially composed for Art Assembly. It’s the perfect way to kick off this celebration of art, inspiration, and creativity for all. BOOK YOUR TICKETS Starts 11am. Tickets £10 (£5 for National Art Pass and Student Art Pass members).

What to see around the city

Memorising the spring for winter at Manchester Art Gallery.

Paying homage to the suffragette banner First in the Fight, which was unfurled in Stevenson Square in 1908, Sally Gilford’s large-scale bobbins installations will be spilling out across the city, including Manchester’s own Stevenson Square, a place where historically people gathered to protest.

Bobbins! also nods to the Northern slang of the term meaning nothing or rubbish, hoping to raise awareness about women’s issues that are hidden, taboo or ignored. Learn more about Bobbins!

4X4 XeroX On the streets of Manchester

Artists: Robert Parkinson with students from The Manchester College

Catch a moving photography exhibition in the shadow of Manchester’s Printworks, the former largest newspaper and print manufacturer in Europe, as with the help of a travelling Xerox machine Robert Parkinson and photography students from The Manchester College create new works on the go. Part-exhibition, part-performance, 4X4 XeroX acts as a celebration of independent publishing.

Listen at Manchester Art Gallery, Afflecks Palace, and the streets of Manchester

Spot all the posters around the city centre designed by pupils from Abraham Moss Community School, as with the use of their own typography – devised with the help of Sam Owen Hull – they raise awareness about the climate emergency.

Artists: Students from Manchester School of Art with Maya Chowdhry

Discover installations and live art that examine the value and importance of ‘space as a gift’ for everyone living and passing through the city, and at a time when free and public space is becoming smaller and more regulated than ever.

The Botanical Society: Look Between the Cracks in The Pavement at Manchester Art Gallery, The Manchester College, Sackville Gardens and a pavement trail in the city centre

Spot textile designs on windows, pavements and print on fabric designed by fashion students from The Manchester College and inspired by 19th century working-class botanist societies in Manchester, who defied class expectations by studying their changing environment. Creating a visual identity for a modern botanical society, the students encourage others to join them in observing urban nature.

The group will envision their own 21st-century Botanical Club, working together to make badges, bags and other creations, and take their club to the streets with stencils power-washed on the Manchester pavement.

A video made in response to the question “Would you rather live in the online world or the real world forever?” Suspended in an eternal ‘respawning’ loop, the children explore ideas around texting, telling off, falling over, love letters, sleeping, control, freedom, rebirth, money, fandom, and school.

Through a series of online workshops, artist David Blandy and young artists from the Venture Arts studio have been reimagining Manchester 8,000 years from now. Through an immersive installation at Manchester Art Gallery, join them in speculative world-building and share your own vision for Manchester far into the future.