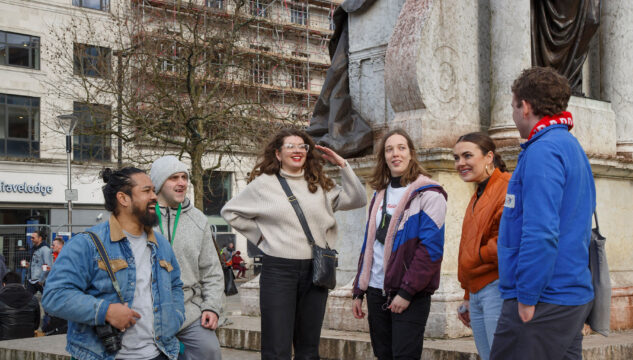 On Saturday 18 June, Art Fund with a collective of Manchester’s leading arts organisations will present the one-day festival, Art Assembly 2022 – City as Art School. The event celebrates the idea of the city as an art school and champions culture as part of educational experiences for all people.

The festival advocating art and creativity is organised by Art Fund with Castlefield Gallery, HOME, Manchester Art Gallery, the Whitworth and The Manchester College. It will present newly co-commissioned and co-created artworks and installations across the city, from established arts venues, busy squares and streets to billboards, pavements and more.

Eight new art works by ten Greater Manchester artists, developed and produced in collaboration with students and learners plus a major project with artist David Blandy and young artists at Venture Arts will be situated throughout the city to explore how everywhere has the potential to become a place of creative learning. Their work encompasses a broad range of media, from film and painting, to textiles, installation, performance and music.

Art Assembly takes place during Our Year which celebrates Manchester’s children and young people with a whole-city approach to help them shape a future that’s safe, happy, healthy and successful. It’s a year of action, together, to create more activities, opportunities, experiences and support.

Manchester Art Gallery will be the hub of the festival, hosting several of the new works including Respawn by artist Olivia Glasser, featuring videos of children from Plymouth Grove Primary School re-enacting actions that are important to them in childhood and exploring what they’re not allowed to do now that they want to do when adults!

Parham Ghalamdar is collaborating with Art and Design students from The Manchester College to produce large scale paintings on canvas as well as A.I. generated animations and projections that have been inspired by an exploration of the city’s art scene and its hidden gems.

Trails and the opportunity to explore the city with a fresh perspective is a feature of several of the new commissions. David McFarlane and Raheel Khan are working with young people from Manchester Secondary Pupil Referral Unit to map ‘personal geographies’ and experiment with augmented reality, bringing the maps to life.

Maya Chowdhry is working with students studying MA Fine Art and MPhil courses from Manchester School of Art to explore ‘space as a gift’ by creating pop-up plinth installations inside Manchester Art Gallery and in St Peter’s Square as platforms for performance art. The plinths will also act as an art material exchange, where the plinth becomes the space for a ‘free exchange’ of donated, scavenged or gathered materials.

Stencilled botanical designs will decorate the streets in the city centre, inspired by the 18th and 19th century working-class botanist societies in Manchester where members would meet in pubs to discuss their latest plant finds, as part of a collaboration between fashion students from The Manchester College and artists Anna FC Smith and Helen Mather. The artists and student spent time researching at Chetham’s library before embarking on their design work.

Poster designs exploring climate emergency, created by students from Abraham Moss Community School with artist Sam Owen Hall will feature on outdoor sites between the school and the city centre. The group have devised their own typography to indicate both their hope and despair about the current crisis.

Taking as its starting point the bobbin, Sally Gilford’s commission with the University of Salford’s School of Art, Media & Creative Technology students tackles women’s issues not often discussed within the curriculum. Linked to the area’s previous life in textile production and used as a shorthand for something that is rubbish or nothing, large-scale bobbin installations in art supplies shop Fred Aldous will spill out towards the Outhouse referencing women’s stories such as the First in the Fight suffragette banner first unfurled in the Square on 20 June 1908. Fred Aldous originally produced the baskets for transporting bobbins and is now a place outside art school walls where a strong creative community exists while the Outhouse on Stevenson Square was a place where historically people gathered to protest.

A guerrilla photography exhibition will grow throughout the day long festival and displayed on construction site hoardings as part of Robert Parkinson’s collaboration with The Manchester College photography students. Using a portable Xerox printer transported on an all-terrain cart, the group will print their photographs that relate to each display location.

Through a series of online workshops, artist David Blandy and young artists from the Venture Arts’ studio have been reimagining Manchester 8000 years from now, resulting in a zine Lost Eons: Three Worlds. For Art Assembly, David and the young artists Niamh, Raven and George, will be transforming their collaborative work into an immersive installation at Manchester Art Gallery. They will be inviting the public to join them in speculative world building, to share and create their own vision for Manchester far into the future.

A series of film testimonies by pupils at eight Manchester schools, about how and why all arts disciplines are valued within the curriculum, will form part of the project City as Arts Schools, jointly realised through Curious Minds and Manchester’s local cultural education partnership MADE.  The films will be shown throughout the day on screens at Manchester Art Gallery as well as having a life after the festival online.

There will be a live recording of Art Fund’s award-winning podcast Meet Me at the Museum in front of an audience at HOME. Meet Me at the Museum first launched in 2018 and offers insights into the vast cultural offer across the country, taking listeners to places that provide inspiration, spark conversation, and enrich lives.

As part of Art Assembly 2022, Art Fund has also committed a £10K Student Opportunities grant to fund four new paid opportunities for young people in the Student Art Pass network to work as Art Assembly Coordinators. These four roles will support the Marketing, Production, Front of House and Evaluation of the festival, and promise an exciting, short-term, paid opportunity for each student to gain relevant knowledge, skills and experience of working in the arts and cultural sector.

Art Fund believes all young people have a right to culturally rich activity through the UK’s brilliant museums, galleries and historic houses. At a time of unprecedented financial difficulty, museums’ future resilience relies on reaching new audiences and serving their local communities more meaningfully than ever.  In November 2021, Art Fund launched a public campaign, Energise Young Minds, to enable them to spend £1 million to help museums and galleries across the UK to inspire children and young people. Projects like Art Assembly are only possible thanks to the generosity of those who responded to this campaign, and Art Fund’s members, supporters and legacy donors who are vital to all aspects of their work.

Art Assembly 2022 is a one-day festival championing art and creativity, brought to audiences by Art Fund with some of Manchester’s leading arts organisations including Castlefield Gallery, HOME, Manchester Art Gallery, The Whitworth and The Manchester College.

For further details and how to book tickets for the events and podcast, visit www.artfund.org/assembly