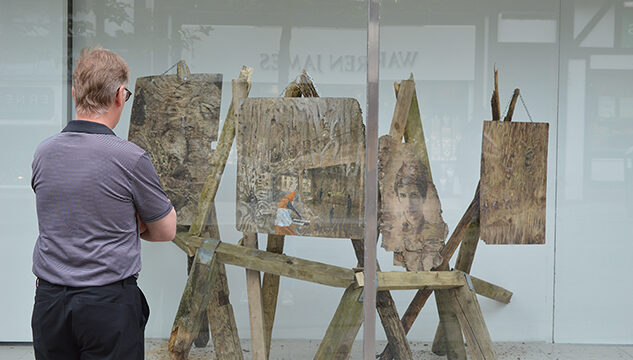 The works are painted onto pieces of wood found floating in the canal and near to where Pearce has moored his boat over the last year. Alongside the spectral figures which Pearce draws out of the natural grain and patterns of the wood, these paintings are also populated by characters from Wigan and Leigh, including Pete Shelley, the Leigh-born singer songwriter and co-founder of the seminal punk band Buzzcocks. Shelley’s DIY approach and punk ethic resonate with Pearce’s own approach to his work. The Loneliest Cone On Earth (#TheLoneliestConeOnEarth) also makes an appearance, a human-sized cone character who featured in 42, a film broadcast by United We Stream to mark 42 years of Wigan’s Boxing Day fancy dress tradition which was curtailed by Covid-19 restrictions in 2020*.

In one window space a set of works are exhibited on a structure made from found fence posts which resembles a crown, a motif which occurs in the signatures of graffiti and street artists. The window spaces of this former Marks and Spencer afford Pearce the opportunity to present something directly to the street and passers-by while also protecting the fragile nature of his found materials.

Occasionally the image of a rabbit has appeared in Pearce’s work. It recurs through this new series of paintings, and a repeat pattern also forms a mural. Since antiquity rabbits have been associated with fertility on account of their ability to survive, despite being heavily hunted by a variety of predators. The flipside of this symbolism is an expression of vulnerability in the face of a brutal and indifferent nature, a symbolism which has perhaps taken on a new light over the past year. For Pearce, making these works during periods of lockdown and isolation has been a way to focus his energy throughout a time of uncertainty. As a result, they also capture moments of that anxiety. There is perhaps something menacing or creepy about the dark forces which emerge in Pearce’s work, but like the diverse symbolism associated with the rabbit throughout history, Pearce’s works also have a playful and resolute side to them.

*42 was produced and directed by AL and AL, artist film-makers and creative directors of The Fire Within, Wigan in collaboration with dance choreographer Amy Burdon of WigLe Dance and artist Anna FC Smith.

Aaron Pearce: There’s only so far that the eye can see is installed in the window spaces of Castlefield Gallery New Art Spaces Wigan, a former Marks & Spencer store (11 Standishgate, Wigan, WN1 1UE) facing Standishgate next to Caffe Nero. If driving, you can park at the Grand Arcade Shopping Centre – all details including address here.

Image: Aaron Pearce, There’s only so far that the eye can see (2020). Image courtesy Romane Teillet.