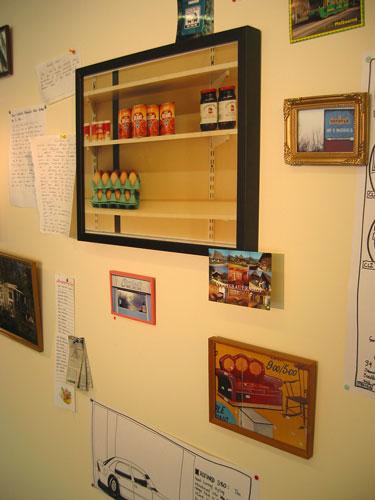 ‘Where Are You?’ – Kevin Boniface and Joanna Cotterill

“It happens to be Huddersfield, but Royal Mail Operational Grade Delivery and Dispatch Officer (aka postman) Kevin Boniface has more than northern parochialism in his sights. While his acerbic wit finds ample fuel in this Yorkshire town, Boniface stresses that his targets are universal. Eccentricity, pettiness and predjudice are found everywhere, but it takes a special talent to expose them so deliciously in all their glorious absurdity.

Manchester tart to Boniface’s Yorkshire pudding is photographer Jo Cotterill, whose succint images complement and edify. Here, a solitary pie has room to contemplate the meaning of its existence as it languishes unbought on its shelf. There, two bewigged dummy heads stare suspiciously at the viewer – ‘You don’t come from round here!’ Not a question but a statement.

So, Where Are You?
You are here.”
Eric Swanepoel – satisfied reader

“Where Are You?” is the diary of a Huddersfield postman written by Kevin Boniface and photographed by Joanna Cotterill. The exhibition is based on their recently shortlisted ‘Bookworks New Artists & Writers Award’ artists publication of the same name.

Kevin Boniface graduated from Liverpool University in Fine Art & Geography in 1993. After several early exhibitions of his work he established ‘laundry’, a clothing design partnership which exhibited at The Business Design Centre and The Clothes Shoe Live, selling to independent retailers nationwide and being exported to a dozen other countries. Since 1998 he “Got cross, became a father, a postman at Royal Mail Huddersfield and a sort of writer/artist thing. Contributed to Flux magazine, created artwork for JackieO (rock & roll band) and successfully completed the Royal Mail 7.5 ton driving conversion.”

Joanna Cotterill studied Photography & Imaging at Manchester Metropolitan University and has worked as a freelance photographer for the last 5 years, producing commissioned work for designers, architects and magazines. She has had several exhibitions, received 2 Cream Design Awards for work commissioned by Northbank Designers and, aside from the commercial aspects of photography, continues to work on her own projects. The main theme of her current body of work is a commentary on the shift from comunity life to an increasingly consumer led society. Focusing on parades of shops in Yorkshire Cotterill concentrates on the peculiar aesthetic and identity which provide a shopping experience far removed from the non-personal indifference of shopping malls.