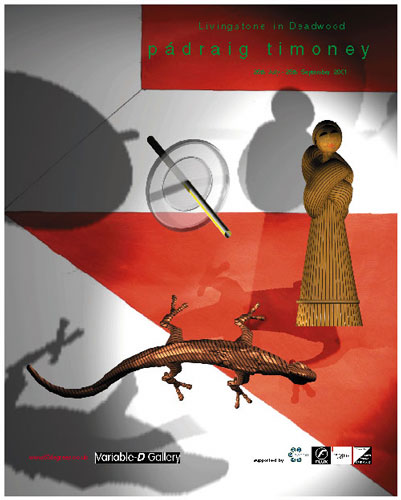 Responding to the growing interest in the forms of exhibition spaces for new and emerging technologies, director Roger McKinley used the hi-tech meets lo-fi approach, buying advertising space in established printed publications. Each of the 5 commissioned images featured as pages in specialist art and youth lifestyle magazines including FLUX, i-D, Dazed And Confused, and BLUEPRINT throughout 2001/02.

For artist Dean Hughes his “Flat Staples” image suggests a template for the page that would usually not have such geometry (much like the flat shape of a cardboard box before it was made into its functional shape). What is seen are images of staples in various positions or “states of flatness” – some are opening, others closing.
Artist Padraig Timoney responded to the virtual space with “Livingstone in Deadwood” in which a series of symbolic objects including a corn dolly, lizard, drinking straw and lid, take on a relationship to the axes of 3-Dimensions – up and down, across and back, and illusionistic depth in the 2-D form of the flat page.

As researcher for the Centre for Science, Technology & Art Research part of the University of Plymouth, Chris Speed created “Production Room” to expose the VRML code that is used in the construction of computer 3D modelling. His work consists of a text version (or code) of information that is used by the VRML software to create recognisable shapes.

Writer/artist/critic Stewart Home stages an intimate moment with himself and a male blow-up doll in “Trip: High Modernism with Lysergic Emanations”. The image of the doll is purposely manipulated to raise its profile above the surface of the picture plane as a subtle look at image and space transgression, central themes to the Variable-D Gallery’s investigation.

Finally, artist and performer Suki Chan teams up with photographer Dinu Li to create an image combining 3-D graphics, photography, and drawing that depicts a scene from a fable of “Princess Jin”. The image is an evocative and ambiguous way to conclude this series of commissions that seems to unravel the aims and ambitions of the project and the future of image technology.

The Variable-D Gallery is curated and directed by artist Roger McKinley. From its debut project “Janus Way” in the publication “Black Diamond” during the Liverpool Biennial 1999, the Variable-D Gallery has curated ‘space’ in FLUX magazine, Blueprint, i-D and Dazed & Confused throughout 2000/01. In addition, a poster based exhibition “Ween X – Lynas Paco and Pete Wok” was commissioned by Castlefield Gallery part of the touring exhibition “Apocalypse Now and Next Week” also exhibiting in Outline Gallery, Amsterdam in 2000/01, plus CD-ROM animation for Dec/Jan issue of FLUX magazine entitled “Natural Things”. Visit and follow links to “DIGITAL” and “3D DESIGN” to Variable-D Gallery.

More on the Commissioned Artists

Dean Hughes is a Manchester-based artist who works with the minutiae of disposable everyday materials. Since his selection part of the British Art Show 5 during 2000/01, he has exhibited throughout Europe and America. His recent exhibitions in 2002 include: New Work at the Turnpike Gallery in Leigh, and group show at the Angel Row Gallery, Nottingham exploring ideas of ‘nothingness’.

Padraig Timoney is an artist based in Liverpool. His output includes recent one-person exhibition at the Bluecoat Gallery Liverpool, published writing in Art Monthly and Frieze. He is also the image selector and sequencer for Tom Wood’s Bus Odyssey (published by Hatje Cantz 2001) and the forthcoming “Photie Man”. Timoney exhibits new work at Castlefield Gallery in spring 2003.

Chris Speed is a telespacial researcher for the Centre of Advanced Inquiry in the Interactive Arts – Centre for Science, Technology & Art Research part of the University of Plymouth. His work as a researcher encourages people to interact with emerging technology in new and unspecialised ways, breaking down the “knowledge-based” hierarchy in design and art practice.

Stewart Home is a prolific writer, commentator and artist based in London. His novels include Cunt (Do-Not Press 1999), Pure Mania (Polygon 1989) and Red London (AK Press 1994. His works of non-fiction include the seminal work on art, politics, and the underground “The Assault On Culture: Utopian Currents From Lettrisme To Class War” (Aporia Press, 1988) and his new novel, “69 Things to do With a Dead Princess” (Canongate 2002). His work has also included several one-person shows, live spoken word CDs, film/video and book editing, Internet projects and a Punk band. For more information see

Suki Chan is the current Artist-in-Residence at the Turnpike Gallery, Leigh. A Goldsmiths Graduate she has had solo shows at the Chinese Arts Centre, Manchester and The Bull Theatre, London. She has also recently completed performance work at the Green Room Manchester and The Arches in Glasgow (National Review of Live Arts).

Dinu Li is a self-taught photographer based in Manchester. Residencies have included “An Tow Bar” on the Isle of Mull and with the Long Horn Mao people of Southern China. He has just completed a commission for the Open Eye Gallery in Liverpool, and was recently one of four artists profiled on a Granada Television programme that endeavoured a comparative study of contemporary and traditional artists working in Manchester.