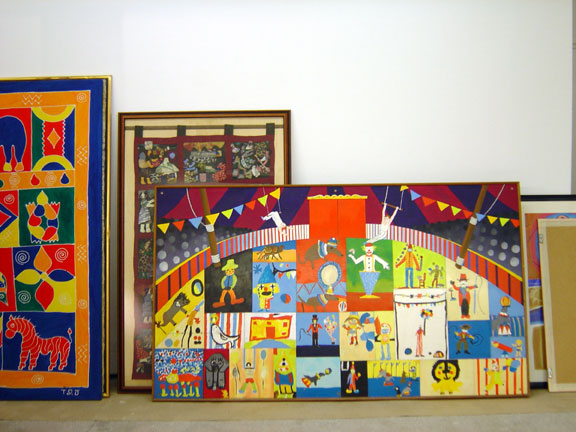 ‘Transfer’ is an attempt to move the entire art collection of the Manchester Royal Infirmary Hospital to the Castlefield Gallery.

In 2002 LIME, formerly Hospital Arts, invited Becky Shaw to develop a new project for the Manchester Royal Infirmary site. The artist decided not to add another work but, instead, to remove the entire collection. ‘Transfer’, therefore, occupies two spaces simultaneously, one crammed with works belonging to another space, the other eerily empty.

The Manchester Royal Infirmary, St. Mary’s Hospital and the Royal Eye Hospital have an art collection of over 300 works, established by Manchester-based organization, LIME, in 1974. Temporarily removing the collection from the walls will, paradoxically, highlight any value or purpose they have for the institutions and publics that they serve. Moving the entire collection is a huge logistical undertaking, involving complex negotiation of ownership and territory, in space that is both public and private. The issues of social organisation are then compacted into those of physical space by compressing thousands of kilometres of corridors, waiting rooms and nursing stations into little more than 100 square metres of contemporary art space.

Art and health were prominent features of the post-war political settlement, smuggling high art into the public domain within an ideology of what is good for ordinary people. ‘Transfer’ asks questions about art’s social purpose by exposing one of the countless public collections to an unforeseen level of scrutiny. By cramming the art and health collection into the Castlefield Gallery, the purpose and identity of the contemporary art gallery is also questioned. In this way, ‘Transfer’ is an experiment in scale, in which an individual artist occupies both a state and a private institution in order to interrogate their cultural and social anatomies.

MORE ON BECKY SHAW:
Becky Shaw’s work explores the way individuals negotiate their relationship to society. She works primarily to contract in social situations, in leisure, health, work and education, and reveals social relationships at play. In trying to understand an entire context, Shaw often reflects on the circumstances which bring her to the project in the first place, causing her to question our perception of the artist and their role. Every project generates a different outcome and uses a range of media and methods including photography, video, writing, lectures, model-making, publication, text and sound. Emphasis and consistency lies in the investigative approach rather than the medium used.

Following a PhD in 1998 exploring the use of art in palliative care, projects in healthcare contexts include ‘The Generosity Project’ which asks why we expect artists to do good, ‘Twelve Museums’, a collaboration with a man with dementia, and ‘Look at you Looking at Me’, a live work exploring the impossibility of collaboration between an artist and a person with dementia. Other projects include ‘Civics: The Science of Citizenship’ a live work exploring the purpose of education and the current government’s use of the arts (part of Hewitt and Jordan’s ‘Futurology’), and ‘The Manufacture of Ultramarine Blue’, the recreation of an ultramarine factory using contemporary labour, for Grizedale Arts.

Becky distributes her work through ‘The Journal of Occasional Trade’, a publication designed to convey her practical and writing work as one practice. Becky is also co-director of the Liverpool art organisation, Static, with architect Paul Sullivan. Static’s purpose is to generate critical activity, using a range of strategies including the online Static Pamphlet, architecture, model making, discussion and projects.