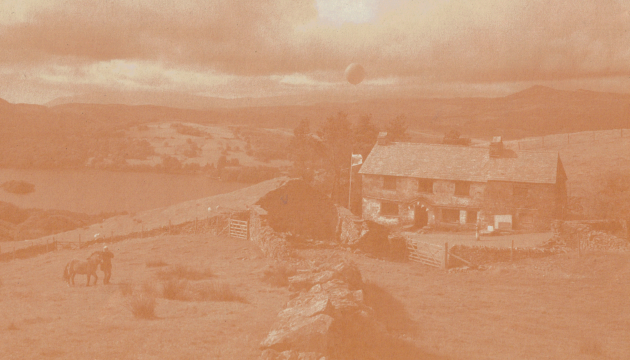 The Story of Sigurd the Volsung and the Fall of the Niblungs, William Morris most ambitious poem influenced by the anonymous thirteenth century Icelandic Volsung Saga, will be on loan from John Rylands Library and can be seen as the starting point for the exhibition. The poem, featuring Sigurd the dragon slayer takes us to glacial terrain providing an unforgettable sense of place, but simultaneously takes us beyond our particular geography to encompass universal and timeless fables. Morris’s poem, as well as many other myths and legends, is steeped in references to nature and mankind’s relationship to the natural world, as much of the work in this show alludes to.

In the late 19th and early 20th century explorers played an important role in contributing to our understanding of the ‘North’. With photographic documentation and scientific research, accompanied by written and oral accounts, they shaped ideas of a place that relatively few people had visited, it functioned as a myth generator and there are countless tales of elves, trolls and witches. In older mythology, the entrance to Hell was supposedly located in the ‘North’. Not until the late 19th-century were such myths slowly dispelled, and replaced by notions of the ‘North’ as a region of beauty and splendour. Mary Shelley’s Frankenstein for example, dreamt of the North Pole as a scene of beauty and great pleasure.

Towards the end of the 19th Century, opportunity for travel increased and this became evident through artists’ depiction of landscape and their interest in specific geographical location. Such work fed a romantic sensibility and consequently contributed to the formation of national identities.

In Britain the Arts and Craft movement celebrated the tradition of individual design and craftsmanship as a reaction against the industrial revolution. One of its founder’s, William Morris, was profoundly influenced by the ‘North’. His visits to Iceland and his engagement with its close-knit society, its myths and legends, influenced his design work and contributed to his socialist ideals.

The work in this exhibition can be seen to question what it means when the notion of land has an association with a culture, and not necessarily with a country. In postcolonial times when geographical maps are redefined and travel accounts re-written, what kind of imagery does the North evoke? At a time when geographical location has little bearing on the art produced in that location, when communities effortlessly take shape virtually, how is location-specificity expressed? Taking into consideration the continued need to represent internal sentiments and to challenge universal powers, myth still plays an important role within contemporary art discourse.

n.b. On Sat 28th July, artists Dan Robinson and Bryan Davies will be closing Castlefield Gallery and taking the gallery staff on an overnight visit to a remote Lake District farm. The artists and Gallery staff will engage in physical labour in return for an experience of the rural idyll, plus food from Grizedale Arts’ new farm, and accommodation from the National Trust. This exchange is part of ‘Thinking Space for the North’ the artists’ project to develop Low Parkamoor Cumbrian farm.

During the industrial revolution that much effected Manchester, reducing the life expectancy of a Manchester male to just 26, Low Parkamoor cottage remained largely untouched. Parkamoor is still without electricity or running water, and our project is to keep it as such whilst restoring it as a working artists residence, a place pre-19th and 20th century to question the path that our industrial and post industrial society has taken.

A Manchester Firsts co-production in association with the Manchester International Festival.