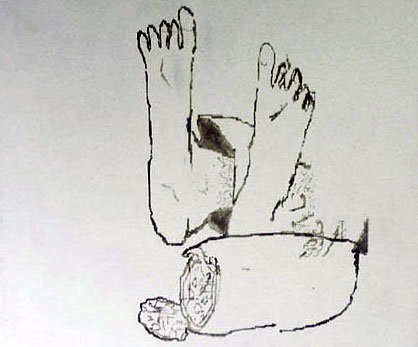 Cartwright & Jordan’s work unites divergent and eclectic influences, including surrealism, natural history, folk-lore, myth, old Europe, new wave cinema and weird Americana. Through a variety of media, their practice exposes the unanticipated factors involved in the assignment of meaning and the quandaries of comprehension. Part painting, part drawing, part cinema, the work explores a range of cultural archetypes and fabricated motifs: restaging and animating the procedures involved in making an image and thinking about what’s been made. Their individual approach highlights incongruous connections between things, presenting imagery drawn from a combination of the real and imagined. Presented as proposals or visual asides, their work illuminates the “stupefying” effect of visual art, and its blunt interruption to the normal flow of everyday images.

Cartwright and Jordan have produced 2 new collaborative works for this exhibition; ‘Wurstundgritz’, and a new film ‘Grubber’, described by the artists as ‘earthy’. Nick Jordan will also be showing ‘Fury’, a new film made specifically for Castlefield Gallery which recently won the award for best film of the ‘Halloween/ICA International Short Film Festival 2004’ and the Best Film Award (Grand Jury Prize) at the Exposures Film Festival, Cornerhouse 2003.

‘Some Mild Peril’, edited by Nick Jordan and published by Castlefield Gallery Publications will be launched at the exhibition’s opening. The publication features the work of Cartwright and Jordan alongside commissioned works by 25 contemporary artists.