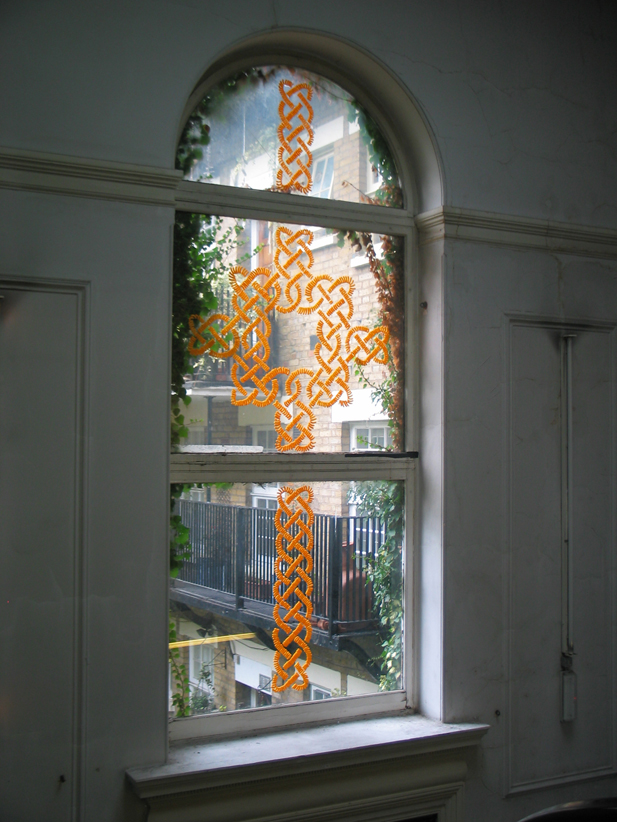 For with honours due to friendship true they celebrated the end of summer in a garden wherein they were set free from golf-courses, sewage works, car parks, underpasses and airports; some small hope too against aristocratic country life, anthrophobic ecologists and the staged internationalism of the Napoleonic academy. These bare-breeched brethren of the Rossie-Crosse hailed Epicurus, Piranesian follies, hermits, Orpheus and the Reggie Perrin Commune. Linens courtesy of Jeremy Irons to watch evanescent light from other windows fall just out of grey churches. Not nature’s bewildering delights (wilderness was for the nobility) but running through the fountained squares and rustic colonnades of Thatcher’s England in a collage campaign to celebrate the sleep of reason – the ability to see through darkness. The white flannel summer, crosses from old party political broadcasts, the mock terror of pompous doorways, the ruined fortifications of Roman Britain, their empty clothing blowing across the high grass, and that suit. They posed elegantly midst bucolic materials such as old varnish and paint, rotted timbers and feathers, read fairytales, folklore, legend, took part in naming rituals in grottoes, carbuncles and gothic cottages. Yet still the sleep of reason – the special talent of the lynx – proved to be too poetic. Glistering and glowing, walking eternally amidst serendipitously encountered foliage and tea-stained daguerreotypes torn from Camera Lucida, proved to be too much like children’s games. Local commodities, they lacked a unitary mythical memory. Tumbled together Gothic relics, they were the wrong kind of contemporaries.

MORE ON NEIL MULHOLLAND:
Neil Mulholland is a writer and leader of the MSc Contemporary Art and Theory at the Centre for Visual & Cultural Studies, Edinburgh College of Art. Following The Garden, he is organising Strategic Art Getts, an exhibition that will feature nude drawings of Sean Connery dating from his life modelling days in Auld Reekie. Now 74, he has four children from five broken marriages and lives in a haunted mansion next door to Charlie Reid from The Proclaimers (the one with the glasses).