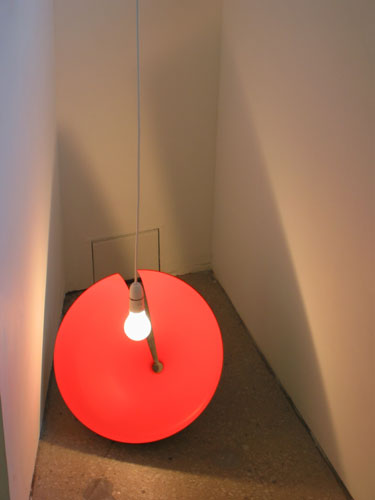 ‘The Evolution Will Not Be Televised’ – El Ultimo Grito

The name El Ultimo Grito translates to English as ‘the last shout’ and reflects their liking for giving products witty names which sum up the essence of the idea. Inspiration comes from experimenting with the tactile or engineering properties of various materials, such as rubber flooring or industrial electric cable. Whatever the material the idea is always evident in the final product.

As well as an exhibition of rare and unseen work you can buy exclusive editions of their best products, including ‘The Revolution Will Not Be Televised’, previously only available in Japan. ‘The Revolution…’ is a two-layered t-shirt; when the first layer is pulled over the head, balaclava-like holes are revealed. On the second t-shirt, underneath, the word PEACE is emblazoned. This simple t-shirt becomes a symbol for all the victims of terrorism and the required uniform for the entire human race. Available in Small, Medium and Large and a great gift for Christmas!

The exhibition will premiere a new commissioned work ‘Pet Shirts’. ‘Pet Shirts’ is a fun prototype product made from jersey and cotton materials, which when stuffed with everyday clutter transform into loveable pets. This simple, yet humorous idea is about changing the clutter you hate into an object you love.

For all you Saturday Night Fever fans, the ‘Ego Disco’ creates an environment where you can privately indulge in your own disco dance fantasies. You can enter a large, mirrorored cubicle on your own, shutting the door on the outside world. At the touch of a button you are surrounded by disco lights, music and the image of the best disco dancer in the room …you! The ‘Ego Disco’ was originally commissioned for the staff at Bloomberg Head Offices, London.