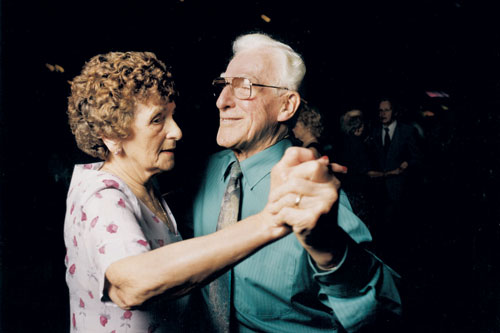 Elaine Constantine’s photographs for Castlefield Gallery’s inaugural exhibition were produced in 2001 and early 2002, when she established contacts within a network of the over 60’s community.

Constantine uncovered a vibrant scene with a host of warm and generous people living life to the full. Many of the images follow certain individuals, including Ivy, Alex and Roy, as they get on with their lives after the loss of partners and loved ones. For these and many others, the tea dance is a link to other social events and networks of friends…and potential lovers.

Constantine was born in Manchester in 1965, and became interested in photography as a teenager while taking pictures of her friends hanging around the northern soul and scooter scene. After a completing a City & Guilds in photography, she worked as a photographic demonstrator in the Design Department at Salford College of Technology while freelancing in photojournalism and capturing the many faces of the Manchester music scene for an exhibition at Factory Records’ drinking hole, Dry201.

In 1992, Elaine Constantine moved to London to take up a job offer as first assistant to Nick Knight, and then continued her freelance career with magazines including The Face, Sleaze Nation, Arena Home Plus and Maxim, for whom she is a regular contributor. Her unique visual style elevated her work to worldwide audiences through contributions to internationally renowned publications such as Vogue Italia, American Vogue, French vogue, W Magazine, Citizen K, Black Book and Details Magazine. Her distinctive advertising campaigns have provided fresh and playful images for clients such as Lacoste, H&M, Nike, GAP, Adidas, Siemens, Evian, Katharine Hamnett, Anna Molinari, Levi’s, Clarins, Max Mara, Jigsaw and album sleeves for Robbie Williams and Moloko.

Constantine’s commercially driven work has gained her recognition and acclaim. Her work won a prize at the 1998 John Kobal Foundation Portrait Awards and her first solo exhibition soon followed in 1998 at the Marion de Beaupré’s Galerie 213 in Paris. Since then, she has featured in a number of exhibitions and book projects including the 1999 Shoreditch Biennale, British Council’s exhibition of fashion photography entitled “Look at Me”, V&A’s exhibition “Imperfect Beauty” and Barbican’s “Jam Tokyo-London” exhibition. Elaine has been a guest speaker at the Photographer’s Gallery, the London School of Printing and the Royal College of Fashion and has recently appeared as one of five featured photographers and judges on Channel 4’s major photographic competition “Year One”.

For the inaugural exhibition of Castlefield Gallery, internationally renowned fashion photographer Elaine Constantine returns home to Manchester with new work focusing on the thriving tea dance culture in the city’s Ritz Nightclub and goes further to explore the lives of these tea dancers in their own homes and local communities. The exhibition celebrates our public launch on Sunday 21st April from 12 noon and continues until Sunday 2nd June.