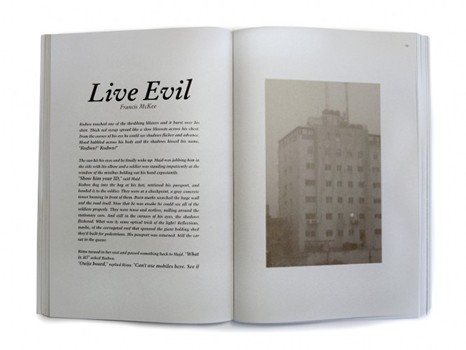 Fellow at The Glasgow School of Art, and director of the Centre for Contemporary Arts in Glasgow, Francis McKee will lead a free talk around his ideas on open source theory, and in response to the subjects touched upon by artists Robert Carter, Helen Collett, Monty, Lois MacDonald, and Joe Fletcher Orr, in the exhibition I Would Like to Join a Club and Hit Myself with It.

More on: Francis McKee is a research fellow at The Glasgow School of Art. His research interests include the exploration of open source theory as a potential economic model within the arts, the role of the archive in contemporary art, and modes of curatorial practice.

Early studies of open source models were presented in an exhibition in Scotland Europa’s office in Scotland House, Brussels. The exhibition, Agile Process: A New Economy for Digital Arts in Scotland, was accompanied by a creative industries symposium and focused on future models for the creative economy in Scotland.

In 2006 when McKee became director of the Centre for Contemporary Arts in Glasgow, he restructured the organisation and the use of the building, experimenting with the use of open source as both a management tool and a curatorial approach to sharing usage of the buildings resources. This has proven successful within the context of the CCA and it is being studied by other organisations seeking an alternative economic model in a climate of recession.

More on: Each of the artists in the I Would Like to Join a Club and Hit Myself with It exhibition have worked both independently and with others to set up structures for the production and presentation of art, research and peer-to-peer learning, including: Lionel Dobie Project, Manchester (Helen Collett, Lois MacDonald) The Exhibition Centre for the Life and Use of Books, Salford (Robert Carter, Daniel Fogarty, Lauren Velvick) Toast, Manchester (Monty) Cactus, Liverpool (Joe Orr), and Fairfield International, Suffolk (Ryan Gander, Simon Turnbull).