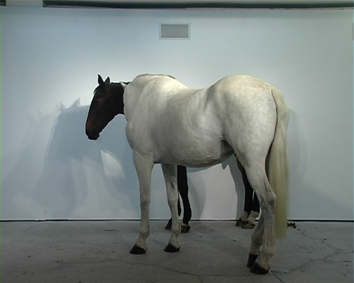 Two unbridled horses were placed in Castlefield Gallery and encouraged to circumnavigate the space. Filmed with a range of cameras locked in fixed positions, failing to follow the ‘action’ or the ‘subject’, this work examines the relationship of a moving subject to a moving image camera. The piece calls into question our expectations of the camera and attempts to use the camera to capture both the real event and to undermine the notion of that reality.

Untitled Horses references Eadweard Muybridge’s 19th Century stop action photographs and his use of multiple cameras to capture motion, often referred to as the birth of the moving image. As the name of the piece suggests it is an homage to Jannis Kounellis’ installation, Untitled (Cavalli) 1969.

MORE ON THE ARTISTS:
t s Beall is an American artist based in Glasgow. She has exhibited widely including Emerged, Glasgow, Experimental Intermedia Gallery, Ghent, Belgium, Tramway, Glasgow, Mariakapel, Holland and Gallery Sowaka, Kyoto. Since 2004 she has frequently collaborated with Mary Bellamy, a new music composer based in Sheffield. Their show in New York, a multi channel video, sound installation, Light Blind, was shown at Brooklyn Fireproof Gallery in April 2006. Two of their collaborative works were recently screened as part of the ION’s alla Soglia del Corto competition in conjunction with the Venice Film festival 2006.

Mary Bellamy’s work has been performed by the London Sinfonietta, Birmingham Contemporary Music Group and the Composers Ensemble. She teaches composition at the University of Huddersfield and at the Royal Northern College of Music.