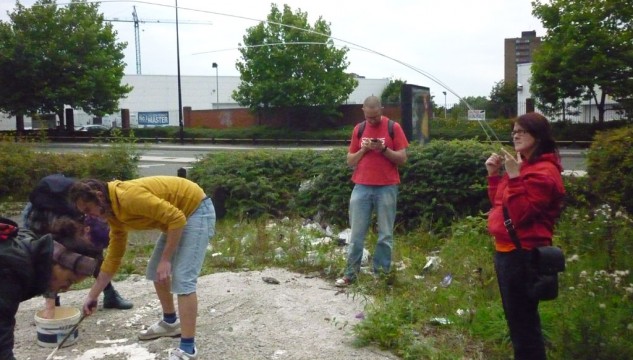 Inspired by the dérives of the Lettrist and Situationist Internationals, a.a.s. invite you to help them search for the city beneath the city using a combination of I Ching readings and the Paranoid-Critical Method. Spending an extended period of time in one location can lend it new significance, and people may often develop spontaneous games that activate the site. During The Nomads, a.a.s. intend to change perceptions of two randomly selected sites during each outing and occupy those parts of the city for several hours.
Join the artists to explore selected parts of central Manchester, leaving Castlefield Gallery at 11am or call 07806 50 27 26 for live updates.

More on: a.a.s have been developing The Other Place, in performance-fiction games, such as KR-36, 2007, The Event, Birmingham, DY-66, 2007, Five Years, London, and SCIENCIFIC, 2008, DOT Arena, Leicester; in co-authoring projects such as The Family, 2009, The Event festival, Birmingham and more ritualistic performances such as Berlin Hoodening: Nagual for Bjørn Nørgaard, 2009, Berlin. They have also collaborated with Plastique Fantastique and Henrik Schrat on Product Clearing, 2008, NGA and Eastside Projects, Birmingham, and presented works in exhibitions such as The Institute of Psychoplasmics curated by Pil & Galia Kollectiv, Pump House Gallery, London.aasgroup.net