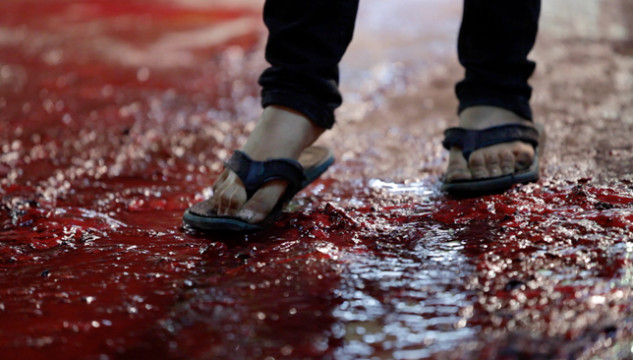 Sophia Al-Maria: Virgin with a Memory

Artist, filmmaker and writer Sophia Al-Maria, who rose to fame with her 2012 memoir The Girl Who Fell to Earth, presents a newly commissioned body of work for her first major exhibition, Virgin with a Memory.

The exhibition takes its cue from Beretta, Al-Maria’s unfinished debut feature film. The film has stalled in pre-production for three years having faced immense schedule, budget and legal complications. Virgin with a Memory alludes to the production challenges faced by Al-Maria and the social and political themes that are central to the film’s plot.

Both an homage to cult cinema and a call to arms, Beretta is a rape-revenge thriller following mute heroine Suad who embarks on a killing spree, murdering men who harass her and other women. Set in contemporary Egypt, it tells both the story of a woman who is pushed to extremes by her environment, and a country that was raped and degraded by its governments.

The exhibition features new five-channel video installation The Watchers No. 1-5 (2014), which evokes the all-seeing male gaze with a reenactment of a dream sequence from Beretta’s script. Conceived as a ‘deleted scenes’ extra from the unmade movie, it will form the centrepiece of Virgin with a Memory, presenting a nightmarish cavalcade of aggressive male scrutiny, using sweeping searchlights and an ominous droning soundtrack. The men depicted in the piece represent Beretta’s five villains. In a departure from the plot, they are shown holding an eternal vigil, acting as gatekeepers to the final realisation of the film.

Four new pseudo-documentary works relate directly to the production of Beretta. Class A (2014) is a video-ode to a Beretta actress who was jailed before filming began. Slaughter (2013) is culled from the first film footage shot during the 2012 Eid al Adha (Festival of Sacrifice). Your Sister (2014) is an imitation music video made to play on a television on Beretta’s set. Video piece Evil Eye (2014) is a direct response to the testing delays faced by the production team during the seemingly cursed development stage of the film.

The novelised version of Beretta’s script, Virgin with a Memory: The Exhibition Tie-in, will be published for the exhibition. This piece is predicated on Al-Maria’s idea that in today’s challenging environment for independent cinema, the only way to achieve an unadulterated director’s cut of a film is to write it as a novel, making it the director’s sole property. Darker and more introspective than the medium of film allows, the novel is written from the perspective of Suad and interspersed with entries from Al-Maria’s production diary. It also features production research, emails, budgets, kit-lists, schedules, sketches, storyboards, headshots and excerpts from the shooting script. It will be on display in the exhibition and available to buy from the bookshop.

Join up or purchase as a gift