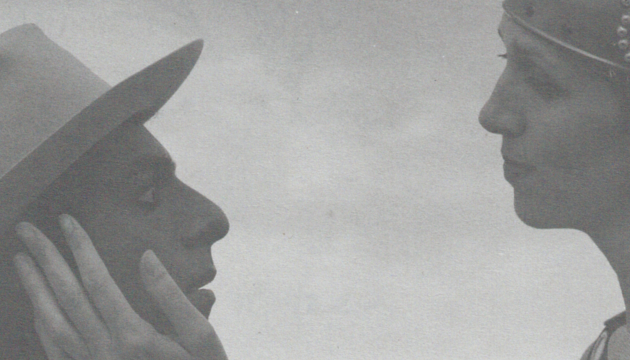 Like much of Dawood’s work Feature engages with mythologies, (in)authenticity, multiple authorship and intercultural interpretations. It was conceived and filmed as a series of performances linked by an overarching narrative of The Battle of Little Big Horn, perhaps the most famous war between the Federal Government and Native Americans. The re-enactment departs from a traditional or revisionist interpretation as it takes on Billy the Krishna (a merging of Billy the Kid and Hinduism’s Lord Krishna), a Valkyrie opera singer and dead cowboys reawakening as zombies. The film deconstructs the Western film genre as it interweaves other fictional and factual characters. The relocation of the battle to a Cambridgeshire landscape further challenges the residual idea of authenticity and creates a new open-ended text that feeds back into a narrative dynamic – that of the process itself.

The performances were written by Dawood with improvisation from collaborators that he invited to take part. They include the artist Jimmie Durham, cast as Sioux Holyman Sitting Bull and David Medalla, cast as Chief Crazy Horse both of whom have dealt with performance issues of cultural colonisation within their own work. It also includes the artist Doug Fishbone, Royal Danish Opera mezzo-soprano Hetna Regitze Bruun, Manchester based artist/musician Mike Chavez-Dawson and Dawood himself. Other casting was sourced through open submission including jockeys from Newmarket racecourse, a Cambridge based Chinese football team and children from the local area.

Feature was commissioned by Wysing Arts Centre and realised with completion funding from Arts Council England with the support of Film London Artists’ Moving Image Network and further support from the Arts and Humanities Research Council.
The exhibition tour, comprising three parallel installations, is a collaboration between Castlefield Gallery, East Side Projects and Leeds Met Gallery. Producer Catherine Williams.

Feature Reconstruction is published by Book Works with written and visual contributions by Jimmie Durham, Doug Fishbone, David Medalla and Sebastian Roach. It is published in collaboration with Castlefield Gallery and Wysing Arts Centre with support from the National Lottery through Arts Council England, the Arts and Humanities Research Council and the Centre for Research & Education in Arts & Media (CREAM) at the University of Westminster.
It is the fifth in a series of co-publishing partnerships initiated by Book Works, entitled Fabrications, commissioned and edited by Gerrie van Noord.

Shezad Dawood was born in London in 1974 and was trained at Central St Martin’s and the Royal College of Art before undertaking a PhD at Leeds Metropolitan University. He works across a broad spectrum of media and his works have since been exhibited in numerous solo and group shows in the UK, including the Whitechapel Gallery, the Tate Modern and the ICA, as well as internationally in Europe, the USA, Australia and India. He has initiated diverse public and ‘off-site’ projects in the UK, Italy and India, and has devised and managed large-scale projects of intervention in London and Pakistan. Much of Shezad’s practice involves curating and collaboration, frequently working with established artists, curators and critics to create unique networks of critically engaged practitioners. Currently he lives and works in London.