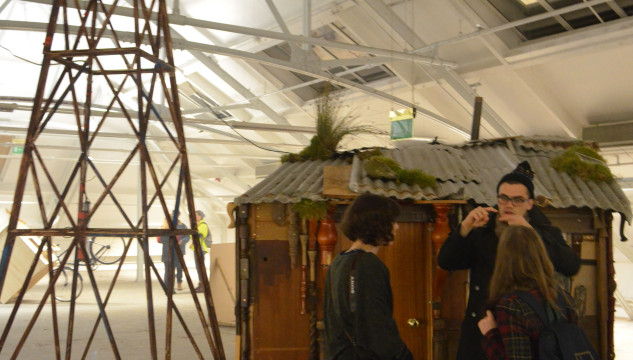 Shed Show is an incubation tool for ideas investigating the themes of industriousness and the amateur. The exhibition will show three new commissions by artists Annie Carpenter, Hilary Jack and Adam Renshaw alongside Northern Art Prize award-winning artist Paul Rooney who will be showing his moving image work Feral-Nowledge (2012).

Annie Carpenter is actively becoming an engine enthusiast, attempting to make a beta type Stirling engine. These engines, more often then not, do not power anything, they simply work for the beauty of working. By making one of these engines and placing it in a gallery, Carpenter is highlighting the similarities in the labour of the artist and hobbyist, and the beauty of making something for no otherreason than to work.

Temporarily finding refuge from the public wilderness, Hilary Jack will be makingsite specific ‘InsideOutHouses’ indoors. Housed within Federation House, once operational as part of the Co-operative business, the work itself will reference its past corporate heritage as it is constructed from reclaimed office furniture. ‘InsideOutHouse’ will act as a “sustainable” power source; powered in part by solar and “wind”, to provide enough energy to make tea, to recharge batteries and digital equipment allowing the audience to see the tangible fruits of the artist’s labour.

Monty has adopted the societal role of the village idiot. Working in parts he will explore all the different ways of making: in reverse, pottering about, stopping what you’re doing and starting something new, drawing ideas whilst having a cuppa tea. Performing the act of tinkering about, the work, in itself is the unseen labour of the activity. Expect to see a visual cacophony of work, made from a range of materials and a series of prototypes that attempts to exhibit the artists mind and method of working.

Feral-Nowledge takes us on sinister journey, through the mind of Jack; a selfeducated man, or, in his own words, a ‘cerebral forced-growth Lighter-Retch’. His homemade illuminated letter shows us the dark streets, and dark rhubarb forcing sheds, that he prowls. From a darker perspective, this existing work sits within the confines of Shed Show, as it narrates the story of a solitary figure that drifts on the periphery of society and the dangerous path followed by someone who has educated himself to the point of dissent.

The curated public programme will include events and workshops: Black Thumb Growers| The Exhibition Centre for the Life & Use of Books