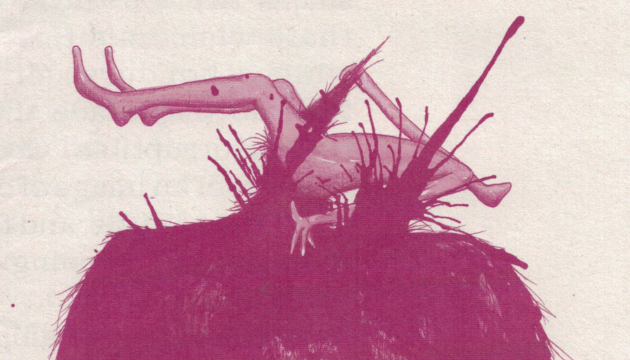 As re-contextualised through the exhibition, their practices represent a new paragraph in the story of a contemporary British art scene where strength of diversity is explored through shared attitude and black humour. A step away from the casual, their work is at times awkward, threatening and seductive. Salem will inhabit the gallery with a subversive flourish, and a drunken nightmare of anthropology.

In Ruth Barker’s practice, the making of marks, objects, and speech can be seen as moments that lend form to darkness. Her work is partly formal and partly autobiographical, and uses this as a way to approach images of death and nothingness. The work often contains a tension between that which can and that which cannot be controlled, as the world leaves a series of stains and thumbprints on an idea.

Sigga Bjorg Sigurdardottir produces wall installations and fastidiously worked drawings. The clarity of Sigurdardottir’s images contrast sharply with the enigmatic nature of her creature’s interactions as they devour, assimilate or annihilate one another in sometimes sexual, sometimes cannibalistic meetings. Through her distinctively brutal aesthetic, the work resounds with a discordant song of abhorrent energy in a distinctive Icelandic key.

Erica Eyres is interested in the human condition and through her drawings and videos examines human nature, how we perceive others and how we portray ourselves to others. The awkward figures created by Eyres are documented in drawings – the line of which emulating the subject matter – or are bought to life by the artist in film. Often the characters lives are exposed as disturbingly troubled, and the viewer is confronted with figures who deserve both our pity and distaste.

Niall Macdonald’s recent work reflects a degree of abstraction where the formal qualities of each sculpture and image suggest the brink of some greater, darker metaphorical scenario. His appropriation of objects and ideas is less a system of reference than a deliberate production process that leaves the work with an elegiac sense of ritualism and uncertain utility.

is a Glasgow based artist and writer, exhibiting in Europe and the UK as well as Japan, Canada, Iceland and Israel. Ruth has also produced a number of permanent public artworks and commissions, focusing on an exploration of ‘the memorial’ in contemporary public space. As a writer and public art advocate, Ruth has contributed to a wide range of publications and symposia including Itch magazine (Capetown), and Towards A New Co-Efficient (CCA). She recently participated in the Working in Public Seminar Series, curated by On The Edge Research with Suzanne Lacy, and chaired the symposium ‘Public Thoughts and Private Spaces, Private Acts and Public Places’ in the CCA, Glasgow. Ruth is the editor of the Public Art Resource and Research Scotland (PAR+RS) website, a co-director of Washington Garcia Gallery, Glasgow, and a board member of Glasgow Sculpture Studios.

Niall Macdonald was born in 1980 in the Outer Hebrides of Scotland. He lives and works in Glasgow.