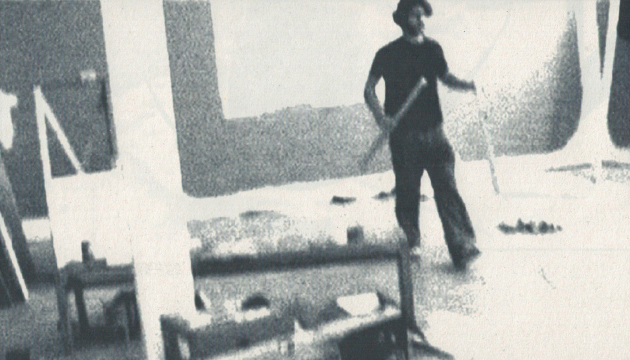 The show will also combine recycled material from Iacono’s previous work together with artworks by other artists and ‘artefacts’ from previous exhibitions at Castlefield Gallery to examine the mechanics of the creative process, the politics of artistic authorship, representation and re-contextualisation of artwork.

“I will curate the unseen; not what you see, but what you don’t see. I will collapse space and time and create a performance installation using trace elements from past exhibitions at Castlefield Gallery. The work will be a kind of time-based collage made by recycling, reproducing and manipulating materials in situ. Wintergarden by Daria Martin; Making Love to My Ego curated by Another Product; Untitled Horses by t s Beall and Khusra: Stains and Stencils by Qasim Riza Shaheen will all be noticeable by their absence: all except for The Beast by Arthur Neve, a huge rabbit suit captured on video during the de-installation of Making Love to My Ego. Arthur Neve will present a special edition of The Beast as part of the show”. Riccardo Iacono

Much of the work will involve throwing objects, such as linen sheeting, peas, wood and rubbish, a device Iacono has often used in his work to explore the relationship between his body and the surrounding environment. His concerns are to maintain a playful and open-ended approach to image making and to treat each and every moment as a unique viewing situation and turning point.

“Essentially I am concerned with questions of who, what and where I am. The objects I throw are like avatars that map the movements and intentions of the eye, mind and imagination. I use them to test and extend the limits of my body. In some of my works the video-making process acts as a catalyst for social interaction. In Kinky (2006) and Cinema Piece (2006) for example, I improvise with the responses of the public”. Riccardo Iacono

Iacono will be present in the gallery space at scheduled periods throughout the exhibition to continue the editing, manipulation and manoeuvring process to examine the migration of materials crossing between time and space and to exemplify the notion of work in progress. Physical changes within the gallery space will be documented, animated and played back via the video projectors and monitors with increasing complexity as the show unfolds.

MORE ON THE ARTIST:

Riccardo Iacono began working with film and video in 1991 to create happenings, interventions and installations in and around Glasgow. He then became heavily involved in abstract filmmaking, creating visual music compositions and kinetic light sculptures for television, cinemas and festivals. Over the years his work has evolved to include computer animation, video collage and performance-to-camera.

Iacono (b. Blackburn, 1969) studied Drawing and Painting at Glasgow School of Art and Electronic Imaging at Duncan of Jordanstone College of Art, Dundee. He has been broadcast / shown on Channel 4, Scottish Television and Sky TV. He has also shown internationally in festivals, cinemas and galleries including: TIE International Experimental Cinema Exposition, Colorado (2001/05), A Century of Artists Film in Britain, Tate Britain (2003); Ice in The Freezer, a one-person show at Pleasure Dome, Toronto (2003); Love Songs From a Dark Body, a retrospective at La Enana Marron, Madrid (2005); From Memory, a one person show at Kino Oko, Prague (2005); and Luz Y Tiempo: A Partial History of British Film and Video Art, including The Art of Seeing and Throwing, a programme of his recent videos, La Enana Marron (2006)

Riccardo Iacono is currently resident at Acme Fire Station, East London (2005-10). Coinciding with THE NO SHOW, in April 2007 he commences a 3-month Animate! residency at London College of Communication, where he will be exploring the correspondences of animation, performance and improvisation.