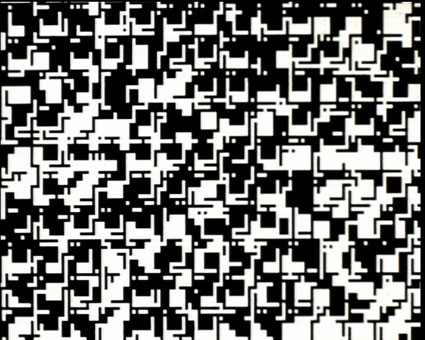 PureScreen 7: A Beautiful Virus Inside the Machine: Animation works by Lillian Schwartz, 1970–8

PureScreen presents ‘A Beautiful Virus Inside The Machine’, curated by Lumen in collaboration with Gregory Kurcewicz. Funded by Arts Council England, Yorkshire (2003)

During the 70s and 80s Schwartz developed a catalogue of visionary techniques for the use of the computer system by artists. Her formal explorations in abstract animation involved the marriage of film, computers and music in collaboration with such luminaries as computer programmer Kenneth Knowlton and computer musicians Jean–Claude Risset, Max Mathews and Richard Moore.

Over the last year Lumen have collaborated with Lillian Schwartz and curator Gregory Kurcewicz to compile a programme of these important works. The 55 minute programme features 11 animations restored to video.

MORE ON GREGORY KURCEWICZ:
Gregory Kurcewicz is an artist and independent curator. He has programmed artist’s film in the UK and Europe, and most recently was the co–curator of Shoot! Shoot! Shoot!, a major, internationally touring, exhibition of film highlighting the work of the London Filmmakers Co–operative, 1966–76.