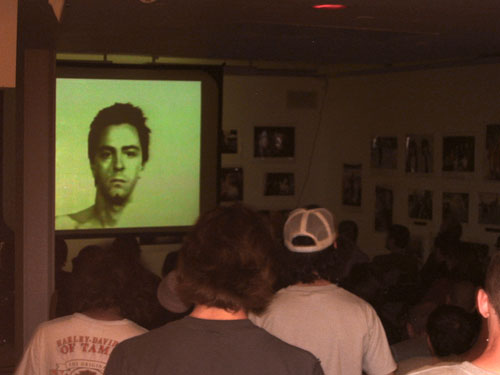 PureScreen is a regular screening event showing an eclectic mix of artist film and video, animation and music promo shorts. Hosted at Castlefield Gallery the PS programme serves as a dedicated showcase for new, previously unseen or underexposed work by artists from across the UK.

After the huge success of PS1and PS2, PureScreen returns with PS3, a programme of experimental and diverse short films, including previously unseen work by emerging artists.

PS3 features award winning (International Emmy, RTS NorthWest) director Martin Wallace who lists Pulp, Aphex Twin, Nightmare on Wax and Tindersticks among his credits. His new work Art of Lovemaking is a “tongue in cheek guide to good luvin’ “.  Following on from this theme, Sarah Carne’s piece You in Love? You Gonna Be spreads the word of her fortune teller while Dave Ball plays around with the teenage love scene in American Beauty.

On the music side, we feature Manchester based RSL’s Wesley Music (Four23Films), and I am Kloot’s latest offering Life in a Day (Retina Circus).

We also welcome back Jane Griffiths who does a take on TV’s DIY shows in DIY Quickfix – Alan in the Garden and Stephen Gray who omits the characters in the 1950’s Flash Gordon series Space Soldiers to reveal the background scenery.

(More to be announced later)

PureScreen was launched in March 2003 by independent curator Kerenza Hines and Castlefield Gallery Co-Director Kwong Lee.  Originally Kerenza approached Kwong with an idea to address the lack of opportunity to see work of this nature within a focused gallery environment.

The resulting diverse programme of artist video, animation and music promo brought together the art forms to create new dynamics and relationships between the work. Work that may not be readily accessible or don’t fit into restricted categories. What’s more, an expansive approach to the programming has meant broader appeal for the audience.

PureScreen programmes normally consist of two half-hour sets with an interval. The selection process is driven by a combination of solicited work and responses to listings in [a-n] magazine and Arts Council NW’s newsletter. The showcase nature of the event has meant that programmed work has tended to be between 1 and 10 minutes.

It has become a social event and a platform to meet artists and discuss the work. Our aims for the future of PureScreen are to continue to show new and interesting screen based work, as well as to encourage and promote the art form by touring the programmes and inviting other curators to screen the work. After PS3 we intend to take a summer break to reconsider our options and relaunch some time in the Autumn.