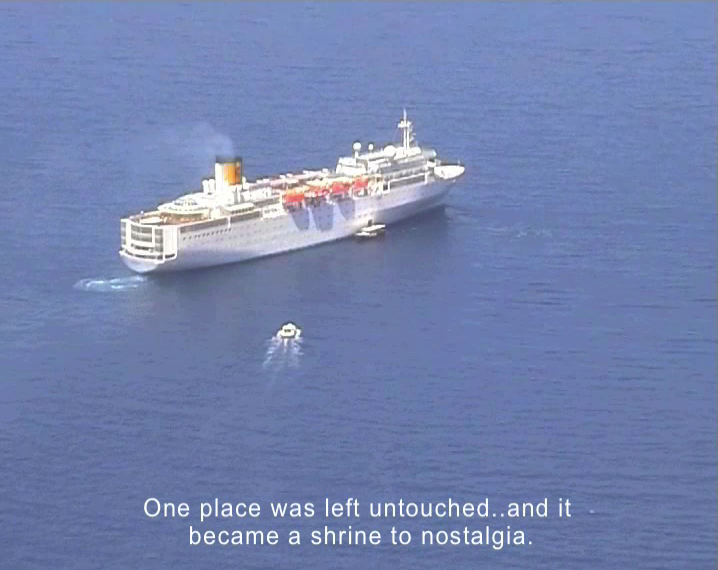 The fourth and final curated programme from the 2007-08 season of PureScreen artist moving image events is PureScreen #22: Hearsay.

PureScreen #22 draws together a selection of new international work, from the open submission call, to examine the various ways that artists explore and question ideas and techniques of narrative, alongside the relationships between sound and image, fact and fiction. The works address aspects of ‘trace’ and memory, and dismantle linear narratives and conventional narrative structure, making us question if what we see is real or imagined.

The range of subject matter includes: the presentation of political histories through family portraits; caricatures of the curator and the neurotic artist-filmmaker pondering the predicament of the moving image; falling in love; and language, methods of communication and translation, and the oscillation between sense and nonsense. Locations shift from Latvia to London, Berlin and Helsinki.

Arnis Balcus / London, UK
Arnis Balcus’ Latvia 1989-1991 / 2006 / 1’ 04”
Using family snapshots captured as a child the artist creates short photo stories that give an alternative view on the most significant years in the history of Latvia – from collapse of USSR to independence of Latvia. Those years (1989-1991) have formed memories and shaped identities of the whole artist’s generation.

Steven Eastwood / London, UK
Hearsay /2006/ 9’
Waking from a disturbed sleep, caricatures of the curator and the neurotic artist-filmmaker ponder the current and historic predicament of the moving image. The framing, editing and sound seem to respond to the tug-of-war of words. You may well have heard this conversation before.

Aikaterini Gegisian / Bristol, UK
Far From Now / 2007 / 7’ 11”
Far From Now was filmed near a half-built hotel in the Sevan Lake area of Armenia, which was left abandoned when the Soviet Union collapsed. The film follows the artist’s efforts to communicate with a group of young boys. As she stops and translates what she imagines they are telling her she builds a fiction, whilst at the same time records a reality.

Rebecca Lennon / Manchester, UK & Berlin, Germany
A Kind of Illustration / 2007 / 5’
A Kind of Illustration investigates various projections on a particular chain of events; the stories and beliefs surrounding a pattern of gaps between buildings in Berlin, a collapsed building in London and a man who constructed an exact model of an empty space from matchsticks, before destroying it in an attempt to lift the curse.

Ellakajsa Nordström / Brighton, UK & Stockholm, Sweden
She was Standing on the Porch / Hon Stod På Trappen / 2006 / 8’ 57”
In She was Standing on the Porch the artist reveals fragments of a life – as seen through everyday images of a person in her closest environment. The artist is interested in highlighting an awareness of the finest nuances of events in order to find clues about how we, as communicating individuals, operate and relate to time and the world we live in.

Mika J. Ripatti / Helsinki, Finland
Girl From Moscow / 2006 / 6’ 13”
A middle-aged film-maker travels to Moscow with a girl and tries to tell something about falling in love.

Erica Scourti / London, UK
Statement of the Art / 2007 / 3’ 10”
Gallery press releases are cut and paste, then translated into three European languages and back into English. The text, oscillating between sense and nonsense, is read by a BBC radio presenter.

Lisa Stansbie / Leeds, UK
Emperor of the Moon / 2006 / 2’ 16”
The Emperor of the Moon is the name of a fictional cruise ship. It is also the last line from Norman Mailer’s best-selling novel ‘The Fight’ (1975). The voiceover recounts a narrative that has been written to include all the titles of Norman Mailer’s best-selling books. This film is one in a series that utilises found lists to create narratives.

Juha van Ingen / Helsinki, Finland
Flutter / 2006 / 3’ 31”
Flutter: In electronics, rapid variation of signal parameters, such as amplitude, phase, and frequency. In structures, rapid periodic motion caused by interaction of structural mass, stiffness, and aerodynamic forces.
Shot on 8mm film, the beautiful image of tropical butterflies is accompanied by a low-frequency out-of-sync fluttering sound. The relationship between the image and sound creates a sense of intimacy and a hint of suspense.

PureScreen is Castlefield Gallery’s screening event for artist’s film and video. Curated from open submissions, the programme provides a platform for outstanding recent work and aims to support new and emerging practitioners. For further info or to join the mailing list please email purescreen@castlefieldgallery.co.uk