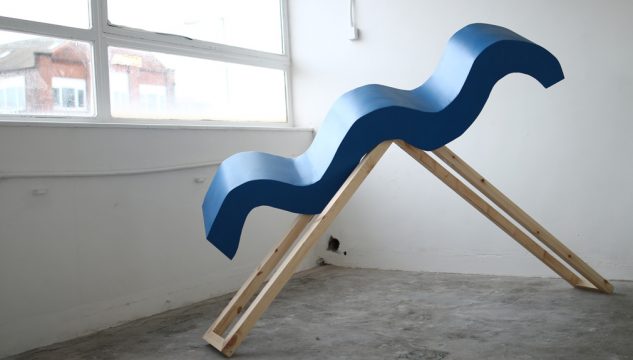 For its first Launch Pad of 2017 Castlefield Gallery is pleased to present Stick or Twist, curated by CG Associate member and Manchester-based artist Kieran Leach. Stick or Twist was selected from members’ submissions by guest selector Patricia Fleming, Director of Patricia Fleming Projects (Glasgow), and Castlefield Gallery’s Curator, Matthew Pendergast. Launch Pads are short exhibitions or performances that punctuate the gallery’s main curated programme and provide artists, writers and independent curators with the opportunity to use the gallery as a test bed.

Stick or Twist, the title of the show, is derived from the process of making the exhibition, whereby after making his selection of art works, Leach gave the individual artists the option to ‘stick or twist’ – either exhibit a work chosen by Leach, or swap and include something different. He relinquished all input as curator, avoiding dialogue, and leaving himself without a say, disrupting his ‘vision’ – for better or worse.

Appropriated and manipulated objects accompany bronze casts, alter egos, Jesmonite, and a girl dressed as a frog – Stick or Twist includes nine artists from across the UK who each demonstrate a plethora of approaches to contemporary visual art. In places, elements of online, social media and the ‘art world’ cultures are satirised, abstracted or condensed; reflecting the aesthetic impact and pervasive reach of digital and screen-based technology.

The original selection of works will be installed as intended momentarily in the closed gallery and documented with a 3D camera, before swapping Leach’s selection as the curator, for that of the artists. During the exhibition 360° videos viewable with VR headsets will be installed in situ, presenting the curators original vision alongside the final exhibition. Time will tell if this produces some kind of compromise between artist and curator, a means for chance encounters, or a comic rendition of the exhibition making process.

More on the artists

Phoebe Baines (b.1991, London) lives and works in London. Baines graduated with a BA in Fine Art (Sculpture) from Wimbledon College of Art in 2014 and the Royal College of Art, MA Sculpture in 2016. Solo exhibitions and projects include: PCBB@GRRG, GRRG, London (2015); and Like No Place on Earth, Teton ArtLab, Jackson Hole, Wyoming, USA (2016). Group exhibitions include: Treat Yo Self, Bloc Projects, Sheffield (2015); Double Helix, Safe House 2, London (2016) and Brouhaha, King Street, Cambridge (2013). phoebebaines.com

Joel Chan (b.1994, Doncaster) lives in London and is currently completing his MA in Fine Art (Sculpture) at the Royal College of Art, London. Chan holds a BA in Fine Art from the Lancaster Institute for the Contemporary Arts, University of Lancaster (2015). Group Exhibitions include: Joel Chan and Matt Hilvers’ Passport to Paris, Cité Internationale des Arts, Paris (2016); Dialogues on the Threshold, The Crypt Gallery, London (2016); RE/CREATION, View Two Gallery, Liverpool (2016); Come All Ye Chameleons [Of The Cosmos… It Is Time], Penthouse Projects Peckham, London (2016). joelchan.co.uk

Aaron Clixby (b.1995, Nottingham) lives and works in Nottingham. He holds a BA in Fine Art from Nottingham Trent University (2016). Exhibitions include Scraping the Bottom of the Bargain Bucket (2015); and Magick Ltd (2016) Surface Gallery, Nottingham. noraybxilc.uk

Daisy Forster (b.1991, Birmingham) lives and works in Leeds and is a co-director of SEIZE projects. Forster holds a BA in Fine Art from The University of Leeds (2015). Group exhibitions include: Skin Deep by SEIZE, Set the Controls for the Heart of the Sun, Leeds (2016); Early Warning, &Model, Leeds (2016); Yeah no I know, Muesli, The Royal Standard, Liverpool (2016); The Curtain Parts, UNNAWAY, Huddersfield (2015); Twice As Nice #1, ENJOY art space, Leeds (2015). daisyforster.co.uk

Kieran Leach (b.1994, Manchester) lives and works in Manchester. Leach holds a BA in Fine Art from the Lancaster Institute for the Contemporary Arts, University of Lancaster (2015). Exhibitions include Companions, The Grundy Art Gallery, Blackpool (2016); and Synchrony, Storey Gallery, Lancaster (2015). He was shown by Castlefield Gallery at The Manchester Contemporary, Manchester (2016). Upcoming exhibitions include Concrete Picnic, Camp and Furnace, Liverpool (Jan 2017) kieranleach.co.uk

Richie Moment (b. 1984, Folkestone) lives and works in London. Moment holds a BA (Hons) in Fine Art from The University of the West of England (2013) and is currently completing his MA at the Royal Academy, London. Group exhibitions include: Premiums, Royal Academy, London (2016); Live Fast Die Fun, The Looking Glass, Bristol (2014); Technopolis, The Ambulance Station, Edinburgh (2014); Pigs and Pearls, Kunstlerhaus, Dortmund (2013); The Guardians Return, The Tank Station, Enschede (2012); The Guardians of the shy Emerald, The Motorcycle Showrooms, Bristol (2012). He was awarded the Peter Rippon Travel Award, Royal Academy Schools, New York (2016).