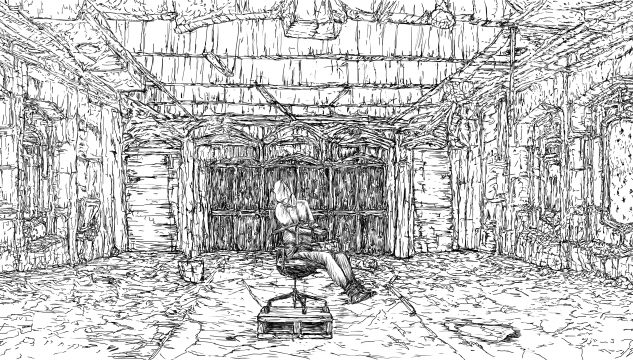 Join us to celebrate the opening of Andrew McDonald’s solo exhibition at Castlefield Gallery.

This spring Castlefield Gallery will present a significant solo show of works in animation by artist Andrew McDonald. A selection of existing pieces will be presented alongside two new works in the medium that has been an integral part of his practice for two decades.

McDonald capitalises on the intensity of a medium that requires drawing images over and over again. His animations often feature lone characters caught in austere, colourless and darkly comic loops. In a new two-channel video installation Fence/Hammock (2017), McDonald introduces two separate figures that are both busy striving for escape. One figure struggles with the entrapments of his hammock, whom then fatigued from his multiple attempts to find freedom, remains caught in an inescapable stupor; perhaps content to simply dream of freedom, to dream of another place. Another figure climbs over a fence and runs off, only to reappear on the screen. The figure is relentless in repeating these actions, despite making little progress at all. Where is freedom to be found here, on the other side of the fence or in resolving to make peace with the futility and absurdity of the situation?

Castlefield Gallery will also premiere McDonald’s Restlessness (2017). A simple yet mesmerising work, Restlessness tracks the flow of liquid as it pools, splashes, and drips, its flow never-ending, and is never contained. This debut of new work will sit alongside existing works of McDonald’s, those such as Everyone wants revenge no2 (2009), Bucket (2013) and Comfort falls (2015). Castlefield Gallery will be full with McDonald’s animation, the exhibition will flood and immerse the gallery in both darkness and light.

McDonald’s work with animation began with pads of tracing paper, drawing on each page from back to front, he later incorporated photocopying, laboriously scanning each image into a computer to be edited together to make a film, eventually he obtained a graphics tablet which allowed him to draw directly onto a computer.

The artist’s approach to mark making is reminiscent of British Post War Modernism; purposefully scratchy hand-drawn lines provoke psychological and physical sensations in us. The artist’s images wriggle and writhe across the paper, existing in real time and jumping from the screen into our physical space. His drawings take on a life of their own, existing as strange life-like forms descending upon us from another place, they are uncanny in their ability to repulse whilst equally compel us to engage with them.

McDonald’s making process is intense, extended periods of drawing and production demanding months of the artist’s time, yet often resulting in viewing experiences that are only minutes, even seconds long. The self-induced isolation required to make McDonald’s work mirrors the lone looped figures in his animations, speaking to the notion of the artist as ‘tortured soul’. Through his work McDonald sheds light on the inner workings of his mind, sharing this momentarily with the viewer, only to once more retreat back to the studio.

Andrew McDonald is Manchester based, teaches at the University of Central Lancashire, and is represented by The International 3. He has exhibited nationally, including with MIMA, Site Gallery, Chapter, The Grundy Gallery, and was featured in British Art Show 6.

To coincide with this exhibition, Castlefield Gallery and The International 3 are pleased to be partnering with Corridor8, the platform for contemporary visual arts and writing in the North of England. With support from Arts Council England’s Grants for the Arts, Corridor8 are delivering their second writing residency programme in collaboration with their Northern partners in Manchester and Hull. Selected from an open call, the proramme will see an early-career writer invited to spend 10 days producing writing that responds to the exhibition at Castlefield Gallery. This writing will be published alongside other commissioned essays as part of a new Corridor8 publication.