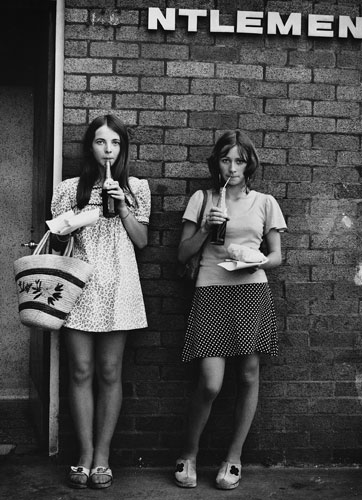 Castlefield Gallery is proud to present an exhibition of new and unseen work from the photographic archives of Tom Wood, curated by artist Padraig Timoney.

Tom Wood has spent the last 30 years photographing the daily rituals of the population of Merseyside; on the streets, from buses and bus stops, in shops and cafes, nightclubs and amusement arcades. He has been compared to many of the great documentary photographers of the 20th century as critics have attempted to place him within a photographic genre. Although much of Wood’s work displays the classic components of street photography, there is an element present which places the images outside of this documentary tradition. “I think of a photograph as a receiver of sensation. Sensations are intangible, I try to organise them through the act of photography.” It is the exploration of sensation, the presence of an undefinable element and the act of recognition in viewing the images, that is explored through Timoney’s curatorial selection.

Wood’s images display the physical nature of the passage of time without sentimentalism or nostalgia. His photography is reliant on routine – visiting the same places year after year or repeatedly recording the same journeys and, inevitably, the same characters. This method of working means Wood is as much the spectacle as the voyeur. There is an intimacy with his subjects as they share the same space and perspective on the world, observing age old traditions of collective public life. A stark contrast to the usual image of the hustle and bustle of the contemporary metropolis.

Although Wood photographs the most mundane situations, the banality of life, he does it in such a way that he captures imaginary worlds; the thoughts and dreams of his public reflected in the windows of a bus or cafe. They are thought-provoking photographs which encourage us to assess ourselves through contemplating the minutae of other lives.

MORE ON TOM WOOD:
Born in Mayo in 1951, Tom Wood grew up in Cowley, Oxford and studied painting at Leicester Polytechnic. He moved to Merseyside in 1978 and has taught photography part-time there and as a visiting lecturer while pursuing long-term photographic projects. His books include Looking for Love (Cornerhouse/Aperture, 1988), All Zones Off Peak (1998), People (Wienand Verlag, 1999) and Bus Odyssey (Hatje Cantz, 2001). Following the exhibition at Castlefield Gallery, Over Here Photieman, a comprehensive volume edited by Manfred Heiting, will be published in 2003. His work is represented in major public collections and he has exhibited at several venues including MOMA New York; International Centre for Photography, New York; Art Institute of Chicago; Centre National de la Photographie, Paris; Institute of Contemporary Art, London; V&A, London; and British Council, London. Wood is fresh from receiving a number of awards and nominations in 2002, including Arle Lifetime Achievement Award, the “Prix Dialogue de l’Humanite” (Outreach Award) at the Rencontres d’Arles and Beck’s Futures.