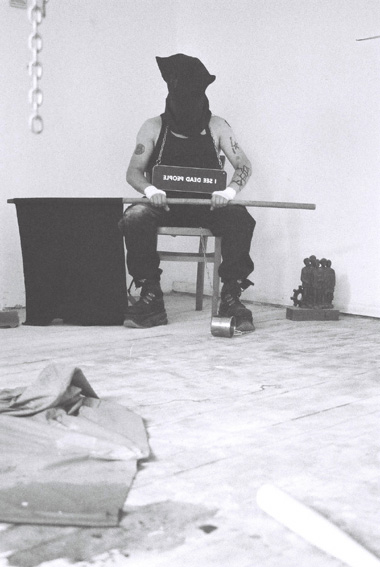 Castlefield Gallery presents a discussion on performance art, its symbolism, and relationship with activism and political actions, with two of the country’s leading interdisciplinary artists. Andre Stitt and Shezad Dawood combine live art performance with, variously; photography, video, text and painting, to present individualised political responses. Here they will review the way in which the political polemic interrelates with performative acts and individuality.

Shezad Dawood works by appropriating various cultural products so that elements such as filmic texts overlap with performative actions, and political proselytising. The works try to make sense of the artist’s own cultural confusion presenting an engagement with, and critique of, the politics of identity. Dawood has exhibited nationally and internationally including; Whitechapel Art Gallery, London; Tate Modern, London; NGBK, Berlin; Earl-Lu Gallery, Singapore; and Gallery 4a in Sydney.

Andre Stitt is based in Cardiff and is one of Europe’s foremost performance and interdisciplinary artists. He has worked as a live artist since 1976 creating hundreds of unique performances at major galleries, festivals, alternative venues and sites throughout the world. Stitt is identified with a strain of performance relating to visual art and art action (identified within his work as “akshun”) that often borders on physical and emotional violence.
Alongside a practice that involves exhibitions, installation and performance, Stitt is Head of Time Based Art at Cardiff School of Art and opened Trace: Installaction Artspace in Cardiff in 2000.

Stitt recently held his first major solo exhibition in Wales at Chapter Arts Centre, Cardiff. The exhibition ‘Reclamation’, included two newly commissioned installations investigating memory and the interrogation of space as a primary vehicle for tracing it’s repression and recovery; each contemplating power in relation to conditioned and colonised space.