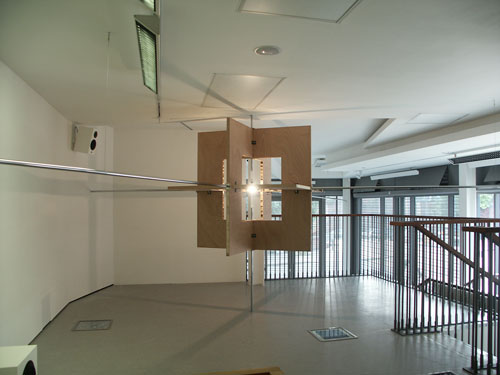 Continuing its commitment to showcase emerging artistic talent from around the country Castlefield Gallery is proud to present a new commission by up and coming sculptor Nathaniel Rackowe.

Rackowe’s large scale sculptural works are designed to interact with the environment in which they are situated; either through kinetic elements or by forcing the viewer to modify how they would normally move about the space. These sculptures question the absolutes of the built environment, testing the boundaries of the space that contains them.

With ‘Origin’, a new site-specific installation created for Castlefield Gallery’s Project Space, Rackowe has constructed a physical manifestation of the x-y-z axis used to plot the position and movement of objects in 3 dimensional space. A light at the centre of the axis explodes the form over the gallery walls whilst protrusions manipulate and restrict the viewers movement through the space and around the object.

His work has an intense yet unpredictable relationship to the architectural space it inhabits, pushing at its limitations. Hovering within the constraints of a room, his structures divide space, forcing new paths and routes creating passages of movement through space. By Creating works that do not have to depend on a rooting in the real, but can interact with spaces and the viewer in an unpredictable way, Rackowe has the freedom to explore the boundaries of the built environment in a direct manner. He uses moving components that can literally challenge the constraints of architecture, using light to trace movement between spaces, and forming tensioned surfaces that threaten to be pierced. Rackowe attempts to connect the known with the unknown, creating work that lies betweeen the two.