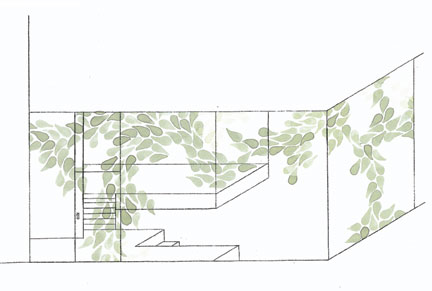 The Project Space will be transformed by ‘Offshoot’, a new commission from metal-smith, Junko Mori. Mori’s work stems from an inherent interest in the visual impact of aggregate assemblages. She often produces works in a ‘serial’ format, exploring representations of the growing phases of an organism. No piece is individually planned but becomes fully formed within the making and thinking process. Repeating little accidents, like a mutation of cells, the final accumulation of units emerges within this process of evolution.

For ‘Offshoot’ Mori moves into a new medium to expand on the theme and process of mutation and repetition, producing multiple vinyl sticker packs. She will use these 2-D pieces to create a 3-D installation within the Project Space, negotiating the balance between craftsmanship and the pursuit of form as a sculptor. Her intention is to create highlights in minimal spaces, as catalysts of a new decorative art.

MORE ON JUNKO MORI:
Junko Mori was born in Yokohama, Japan 1974. She graduated in Industrial, Interior & Craft Design/Metalwork at Musashino Art University, Tokyo in 1997 and in Silversmithing and Metalwork in 2000 at Camberwell College of Arts, London. In 2001, supported by the Crafts Council and North West Arts Board, she completed an Artist Residency at Liverpool Hope University. Mori has exhibited both nationally and internationally and her work has been purchased by several major museums and galleries for public collections. Junko Mori lives and works in Manchester.