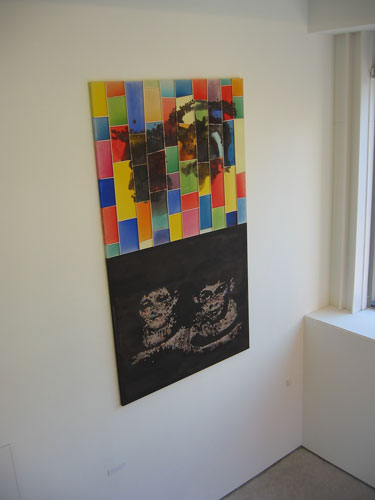 The first exhibition shows new work by Timoney and highlights the unique selection process he employs in his practice. He wades through a variety of visual stimuli, including the internet, publications and printed ephemera, to find images to translate into paintings and sculptures. At first glance the choice of imagery may seem arbitrary but this is a deliberate ploy by Timoney to import resonance or new significance to things which seem mundane; he forces us to re-examine images and objects collected from everyday life, assessing their symbolic value within our visual language. Looking at his world is, therefore, not a passive act but an exploration of our own linguistic and visual skills.

This selection process is further explored in a second exhibition (6th June – 20th July 2003) which Timoney curates. Here, he edits from a vast archive of unseen work by photographer Tom Wood who is fresh from receiving a number of awards and nominations, including Arle Lifetime Achievement Award 2002 and Beck’s Futures 2002. In 1998 Timoney wrote a feature for Frieze on Wood’s photography exhibition at the Open Eye Gallery Liverpool; as a result of this a creative partnership soon developed. They have collaborated on a series of publication projects, including Bus Odyssey (published by Hatje Cantz), where Timoney, in a curatorial role, selected and sequenced Wood’s photographs. During this process he uncovered new layers of meaning in Wood’s images, recontextualising his practice.

These complimentary exhibitions aim to mark the individual acheivements of the artists whilst simultaneously exploring the relationship between Timoney and Wood. Overall, these exhibitions demonstrate the wealth and curious sensibility of Timoney’s visual language.

MORE ON PADRAIG TIMONEY
Padraig Timoney was born in Derry, Northern Ireland in 1968. He studied at St Martin’s School of Art, London and Goldsmiths College, London. Timoney uses a variety of media and materials in his work, including photographs, painting and installation. Timoney’s work, informed by the way meaning is constructed in and through art, juxtaposes concepts and languages to create layers of signification which the viewers are invited to disentangle. Recent exhibitions include The Hunter Became the Hunted, Laure Genillard Gallery, London (1997), Mille Neuf Cent, Analix Gallery Geneva (1998), and London Calling, The British School at Rome, Italy (1998) and 10,000 Tamagotchi Died, Bluecoat Art Centre Liverpool (2002). Padraig Timoney lives and works in Liverpool.