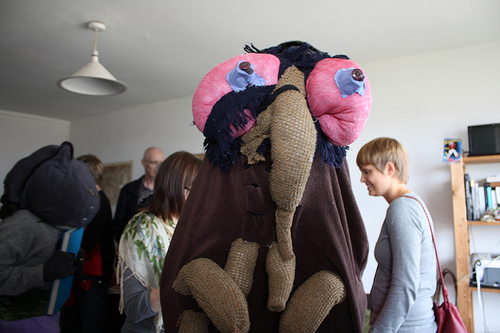 Olivia Glaseser uses her work as a tool to investigate a range of concepts, often in conjunction with explorations into myths within photography, documentary and anthropology.  Glasser attempts to give the medium of film a self-reflexive quality so as to initiate dialogues into the role it plays in contemporary society, our reliance on it and belief in its "truthful" qualities, the audience’s presence often completing the work.

Dave Griffiths, Babel Fiche. For this collaborative film project, Griffiths invites members of the public to gather and select a set of user generated video clips that describe contemporary existence. These will be transformed into a set of colour microfiche films, creating an imaginary media for the anthropologists of the future.  (Dave Griffiths is represented by Bureau)
www.bureaugallery.com    www.fvu.co.uk    www.babelfiche.net

Hilary Jack, Empty Nest.  For the Tatton Park Biennial 2012 entitled Flights of Fancy, Jack proposes to build a giant empty nest. Using fallen wood, twigs and branches and secured to a fixed armature sited within the branches of a 300 year old Chestnut tree. Empty Nest will have the external appearance of a giant Crows nest while the internal structure will be built in the manner of a tree house. The concept for Empty Nest is in line with Hilarys current sculptural practice, reflecting her interests in environmental issues, the use of found materials, the transformation of the ordinary to the extraordinary and utilising themes of abandonment. emptynesttatton.com

The stall featured a nail artist who painted classic works of art on visitors fingernails for a small charge per nail. The choice of the works of American abstract expressionist painting, from the canon of great art of the 20th century, reproduced in miniature by a genuine nail art technician. alison-kershaw.com

Lionel Dobie Project (LDP) is a venture in support of emerging curators devised by Helen Collett and Lois Macdonald. LDP intends to bring the subject of curating to the fore of art practice, aiming to examine traditional curatorial procedures and seeking alternative methods of presenting work that are discursive rather than static. Allowing curators the same freedom of exploration that is commonplace for artists, LDPs manifesto is merely to give curators a platform to develop their ideas while questioning the very foundation that defines curating as their practice. Lionel Dobie Project, 91 Hewitt Street, Manchester, M15 4GB lioneldobiegallery.com

The Manchester Artists’ Bonfire is an annual art incineration which provides a platform for a collective research project on art and/or activism. Artists are asked to pledge a piece of art to the fire accompanied by a piece of writing explaining the reasons for burning the work and/or a reaction to the act of burning art. Manchester artists’ discuss their positions as artists and relationships to their work at a time when art is being re evaluated in economic terms. manchesterartistsbonfire2012.com

SEVEN SITES is a series of installations, performances and events in unexpected locations across Manchester and Salford. Working with local and international artists with one installation or performance occurring each month between September 2011 and March 2012 SEVEN SITES will develop as an accumulative collection of diverse encounters.  SEVEN SITES is a project by Laura Mansfield and Swen Steinhauser. sevensitesproject.com