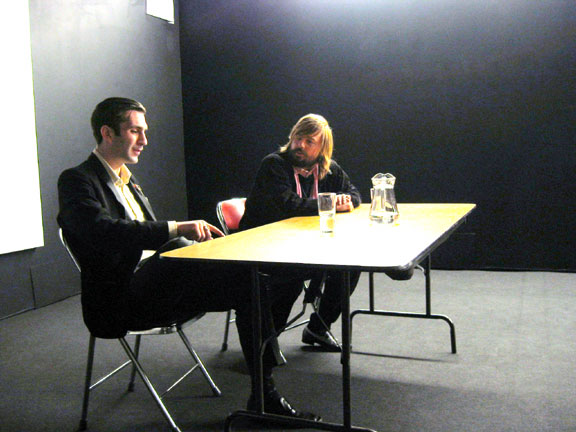 Continuing the artist’s ongoing exploration of style sub-cultures and other contemporary icons, Mark Leckey’s single-screen projection work ‘Parade’ is a stylish and provocative meditation on the theme of the metropolitan dandy. Brimming with historical literary allusions, yet equally deftly located within a distinctly contemporary demi-monde of visual art, music and fashion, Leckey’s oblique video narrative is a dark and claustrophobic vision of a man inhabiting a world of hallucinatory desire.

Leckey will be discussing his work and the place of the sartorially elegant male in contemporary society, with writer and artist David Piper. Leckey will also be screening ‘Fiorucci Made Me Hardcore’ and ‘Londonatella’ during the event.

MORE ON MARK LECKEY:
Mark Leckey makes videos and sound-system installations that reflect his interests in underground music and club culture. He has contributed work to ‘Crash!’, ICA (2000) and ‘Century City’, Tate Modern (2001). He first came to prominence with ‘Fiorucci Made Me Hardcore’ (1999), a history of UK dance music. For Tate & Egg Live he used Tate Britain as a backdrop to create a sound installation, entitled ‘Big Box Statue Action’, based on familiar artwork from the collection, including Jacob Epstein’s ‘Rock Drill’.

MORE ON DAVID PIPER:
David Piper studied Fine Art at Chelsea College of Art and Design, 1999-2003. He currently writes for Flux Magazine, The Chap and Erotic Review, and is a performer and mc/compere for ‘whoopee! burlesque club’, and bands such as ‘The Guillotines’ and ‘Dr. Miasma’. He has also acted in various films, including the forthcoming Prayer Cushions of the Flesh (based on the novella by Robert Irwin). Piper is currently busy producing a collection of eccentric Victorian bicycle contraptions for Hendricks Gin, fundraising for a mobile peepshow (‘Piper’s Priz’d Perambulating Peepshow/Wyndham’s Wond’rous Wandering WooWoos’!) and designing a window display for Selfridges. Piper lives and works in London.

‘Parade’ is commissioned by Film and Video Umbrella in association with the Brighton Photo Biennial. Supported by the National Touring Programme of Arts Council England and The Henry Moore Foundation.