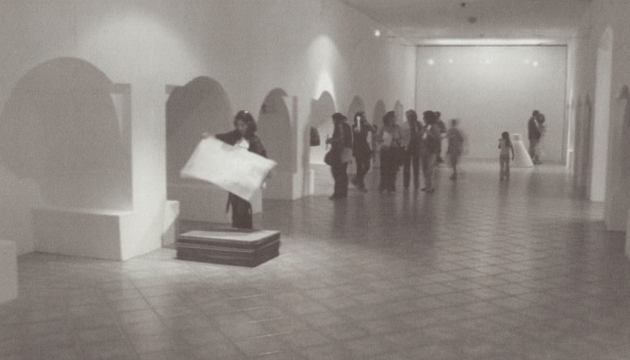 In his piece Pride a plaque is mounted at the entrance of the show announcing the artist’s pride in supporting the gallery, similar to those displayed in the entrances of museums and heritage sites. The phrase on the plaque refers to an economic relationship and social structure encouraging us to reflect upon the context in which contemporary art is produced and consumed.

Specialized Technicians Required: Being Luis Porcar is a video installation in which Luis Porcar, a well known Spanish dubbing actor, speaks for one minute about his work when dubbing the voice of the American actor John Malkovich. The video is presented dubbed into English by John Malkovich himself, thus closing the conceptual loop of the work with his collaboration.

Social Sculptures (everybody is an artist) is an installation in which those immortal words by artist Joseph Beuys that changed attitudes to art and authorship are repeated again and again by three actors. Each actor is directed to employ different methods of delivery (anger, sadness, joy) to convey a range of meanings and emotions.

In Points of Viewtwo video monitors are placed on a table back to back. On the first one we see fragments of interviews in which the artist talks about his work. The second monitor shows interviews of several international artists. The images on both monitors are almost identical. This is due to the first one being a re-enactment of the scenario in the second monitor, only the first monitor has the volume turned up.

What is Art Flowchart is a poster that aides the visitor in deciding what they consider ‘art’ to be by answering a series of yes-no questions. The route to a variety of answers has been simplified using a ‘binary logic’ similar to that used in computer technology. The work is shown as a pile of posters that the visitor can take away.

In the short film The Two Teams Team, two actors discuss the pros and cons of video art and cinema while taking a break on a film set. Their dialogue explores differences between the two media such as issues around budget, our emotional engagement with them and the relationship that both cinema and video-art have with fiction and reality. As the film progresses, reality becomes fiction until the microphone interrupts the frame and the director’s voice is heard.

Coinciding with this exhibition will also be the launch of Saiz’s latest book 101 Excuses. How the Art Legitimizes Itself written by Saiz as a quasi exhaustive collection of grounds for legitimising works artists utilise in the contemporary art scene.

Manuel Saiz is a London based visual artist. Since the mid eighties he has shown sculpture, photographic print and video in art galleries and museums worldwide. Since 1995 he has worked mainly with single channel video and video installations. His productions have been shown in many artists’ film and video festivals, such as Impakt (Utrecht), VideoLisboa (Lisbon), Videoex (Zurich), Int. Kurz Film Fest. (Hamburg), Transmediale (Berlin), among others. His video installations have also been shown in commercial galleries and public spaces. Recent shows include Parallel Universes at Moriarty Gallery (Madrid), Nominal Politics at T1+2 Space (London) and the group shows East End Academy at Whitechapel Gallery (London) and Save the Day at Kunstbuero (Vienna). Specialized Technicians Required: Being Luis Porcar received the first prize in the main competition of the Internationale Kurzfilmtage Winterthur.

As a founder member of TheVideoArtFoundation in 2003 he directed 25hrs (www.25hrs.org), a screening showing a selection of 300 international video art works that made up a complete panorama of video art creation since 1990. Other recent projects include videoDictionary (www.videodictionary.org) and Art Summer University (www.artsummeruniversity.com) Tate Modern, September 2007. Manuel Saiz is represented by Galeria Moriarty (Madrid) and Montevideo (Amsterdam).