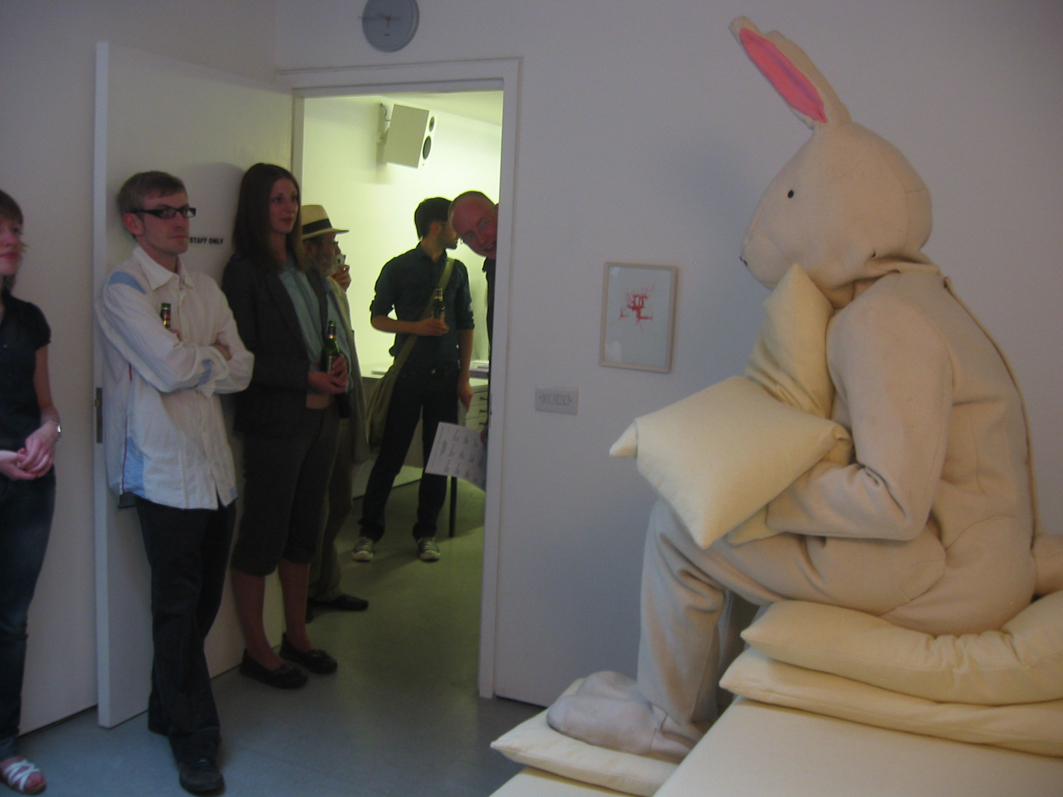 Making Love to My Ego

Taken as a facet of the human mind that functions as a unifying falsity constructed to conceal the fragmented nature of the mind and body, the ego represents fertile ground for exploration. The (un)reality of identity and character disintegrates as each work reflects on the subject at hand.

Through escapism and fantasy we behold the ‘Other’ residing in the artwork presented. Connections to the pioneering work of Freud & Lacan become tantamount, their theories offering an interpreting language for the work on display.

The selected work purposefully rejects the notion of the self-portrait functioning to represent the artists true ‘self’, but depicts the artists using ‘I’ as a medium through which they comment on self, identity and society.

In developing this exhibition, Another Product drew on interests inherent in their own work, which for both artists includes the development of an alter-ego character and the subsequent re-presentation of this character within the context of fine art practice.

MORE ON THE ARTISTS:

Dan & Marianna O’Reilly will be showing their new illustrated book ‘The Anatomy of the Ego’, which forms a dissection of the ego, attempting to pull it apart into its constituent pieces. The writing results from an endeavour to place an isolated ego on the page, wrenching it out of the mind and making it exist on paper. The illustrations in the book form chaotic rhythmic diagrams of this process.

Noemi McComber will be exhibiting ‘Ritual’ (Or semiotics of a make-up). Noemi sits in front of a dressing table mirror, with the camera placed in a manner that allows the audience to take the place of her reflection. What first appears to be a normal process of applying make-up quickly transgresses into a subverted application of a grotesque mask.

Pete Karkut’s ‘Circle of Foxes Pt.1’ takes us on a journey into shamanism and tantra. The films intense aesthetic and soundtrack bring Pete’s experiences to the fore as he narrates the unfolding story and it becomes unclear if this is a documentary or a fictional work. ‘Any serious practical involvement with either of these ancient disciplines will inevitably result in events that go far beyond our normal egocentric view of the world around us.’

James Moore’s new paintings depict his alter ego, which was born a few years ago in London. This character exists in a literally made up world, a collage of the artist’s interior and exterior existence. The efforts to produce a realistic environment for the character to exist within are somewhat excessive, as the character seemingly hangs about doing nothing and being melancholic.

Dawn Woolley will present photographs and a dolls house that is modelled on the artist’s own home. The obsessive quest for accuracy and faithful miniaturisation defines the piece in reality, but its inhabitants are contradictory in nature and disallow any notion of confession and truth of the ego.

Janet Griffiths’s photographic self-portraits represent fantasy rather than truth. The work stems from her desire to escape the domestic reality of the home, leading to these vivid documents of an array of characters that are unleashed in front of the camera.

Dale Holmes will be exhibiting a bird hide- the domain of his alter ego- the twitcher. The contents of which hint at this extremist ornithologists life and times. ‘No longer illusive….. as shaggy as an Aberdeen Angus. His eyes as wide as saucers staring at the beauty and horror of nature.’

Zen Marie will exhibit a photographic installation in which he plays a Victorian gentleman. The work forms an exploration of Zen’s ‘other colonial self’, playing cricket in his home town of Durban. ‘The two supporting images are details of the cricket pitch and work as a counter point in opening up ideas of the ritual of imagining myself as colonial and African at the same time.’

Deej Fabyc’s video work ‘Anorexia’ shows the artist in a state that could be fear or flirtation, as the viewer stalks her through the narrow streets of Amsterdam. The stalker is neither unmasked as benign or malignant as the film reaches is climactic end, every time she reaches the safety of her door.

Lisa Holden will show her heavily manipulated photographs, in which her image serves as the starting point. Repeated processing and layering obscures representation, building a strata of unintelligible matter onto her portrait. The photographic space created contains sampled imagery from Pre-Raphaelite paintings and chaotic artefacts that result from the process, representing fragmentation of the self and self-production.

Arthur Neve will perform and document ‘Het Beest’. In his immaculately produced Rabbit costume, Arthur becomes a melancholic figure unable to communicate with the audience. The over sized creature seems to be resigned to its existence and appears to lack any motive, as an expectant audience waits for him to perform.

Richard Dedomenici will exhibit a chart that traces the rise of his ego as he plots the results from a series of Google searches of his own name. The work produces a surface depiction of his virtual identity, and the act of its creation illustrates the ego’s desire to be recognised and known. Richard will also be showing a video loop called ‘kisspractice’ in which the artist makes love to his ego in a very literal way….

Charles Citron’s work consists of videos and photographs that follow the travels of ‘Joe the Cowboy’, a plastic toy that satirically mis-represents the artist as a cultural migrant. The videos soundtrack captures the fragmented verbal outpourings of this dis-associated character as he personifies both a stereotypical tourist and appropriated western ego. He finds everything lacking when compared with home.

Making Love to My Ego will tour to de Veemvloer gallery in Amsterdam in 2007.

MORE ANOTHER PRODUCT: James Moore & Dawn Woolley are artist/curators based in Manchester, operating under the name ‘Another Product’. Past curatorial projects have included Showhome, an exhibition exploring the uncanny presented in a vacant city apartment and Peepshow, an attempt to become curatorial pimps by paying selected artists a fee to produce work about sex.

Making Love to my Ego is supported by Arts Council North West and the Royal Netherlands Embassy. Another Product also received support from the NAN Bursary scheme during the research and development of this project.