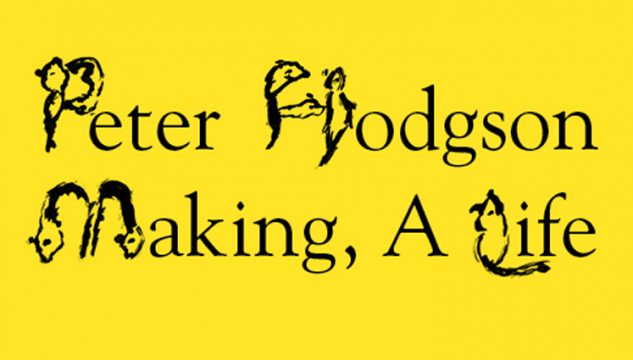 Making, A Life: The Peter Hodgson Retrospective, with Peter and friends

Making, A Life is a touring exhibition that celebrates the lifetime’s work of the Cumbrian folk artist Peter Hodgson (born 1950). Hodgson has been a highly influential figure on the visiting artists and curatorial direction of Cumbria-based Grizedale Arts (founded in 1978), one of the UK’s most influential contemporary arts organisations, and this is the first ever exhibition to bring together over four decades of Hodgson’s diverse output.

Hodgson grew up on a remote Lake District farm without electricity or running water, and after learning leatherwork and saddlery locally, now works from his studio and shop in Ambleside, a thriving town in the heart of the Lakes. Peter’s work has evolved to encompass engraved glass, hand-painted tiles and ceramics as well as painting, yet his enduring theme remains his acute and witty observations of the natural world, in particular the habits and characteristics of animals, wild and domesticated.

Hodgson is someone that answers most questions by making: making what he needs, making for a living, making his world interesting and engaged. This impulse is shared by the artists that admire him, all share a ‘work it out your own way’ attitude, being in many ways self-taught, for Peter that qualifies him as an amateur, whilst for the art school trained artists they are defined as ‘professionals’.

Arguably an ‘outsider’ artist, under-represented in the contemporary art world, Hodgson’s new exhibition contributes to a vital review and re-understanding of British folk art. His work moves fluently between popular and naïve art, contemporary art, making and design, whilst drawing on the heritage of the Lake District and of the Coniston Institute itself.

Since first meeting the Grizedale Arts’ Director in 2002, and being introduced to the Coniston Institute, Hodgson has collaborated and co-produced with a stellar-alumni of artists and designers, including Maria Benjamin, Fernando Garcia Dory, Karen Guthrie, Tom Philipson, juneau/projects, Endless Supply and Graham Taylor. Most notably, Laure Prouvost on her 2013 Turner Prize – winning Wantee installation, and continues to work with Laure on many of her internationally exhibited works.

The touring exhibition Making, A Life, will present Hodgson’s independently developed ‘back catalogue’, co-productions, as well as Hodgson and his collaborators’ responses to one another’s creative endeavors.

“For this exhibition the professional artists will be working to present Peter’s work, taking a supporting role to celebrate his work, but also to draw attention to the ethos of Peter’s working method, a way of working that all share, making as a solution, a solution and a stimulus to excite, engage and interest, in essence a force of life.” Adam Sutherland, Director, Grizedale Arts.

In developing the exhibition new artists and makers are introduced to Hodgson’s collaborative network, including Manchester-based, Joe Hartley by Castlefield Gallery, and makers within constituent groups at mima, Middlesbrough, who have reciprocal and dynamic relationships with the institution. Joe Hartley’s role will especially focus on forming an installation for Making, A Life, one comprised of diverse mediums that include ceramics, leather, horn, textiles, wood, print-making, writing and film.

The Making, A Life public programme of demonstrations, talks, events, and off-site ‘pop-up’ displays in other art, cultural, production and leisure contexts, will encourage artful thinking, facilitate learning through making and doing and small-scale production with the public, as a route to wellbeing and planning for a more sustainable, healthier society.