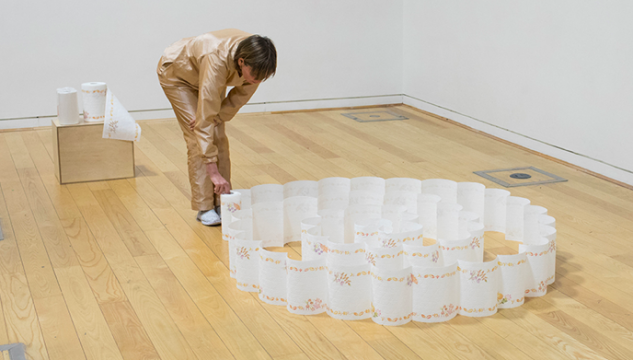 Lisa Watts: Not A Decorator

Not a Decorator is a run of performances by Lisa Watts that will occur in the gallery over seven weekends of the exhibition AND A 123 at Castlefield Gallery, Manchester (between 22 September – 5 November). The performances transform domestic/ DIY/ gardening materials, such as kitchen towel, grease-proof paper, bin liners and bird seed into magical crafted events. Not a Decorator builds on Watts extensive practice that spans two decades.

The performance, Not a Decorator, offers an inventive form of performance that suits the ‘white cube’, gallery setting, as an alternative to the theatre space, which allows different audiences to view performance. Not a Decorator was first exhibited and performed at SIA Gallery (Sheffield) in 2017, with Watts now touring the piece to Castlefield Gallery 2017 and on to John Hansard Gallery (Southampton) 2018.

Watts’s performances involve the artist experimenting with the inherent qualities of the items manipulating them into magical events.  Her gestures unlock the beauty and the spectacular in what are otherwise everyday domestic items – items that are laden by the meanings embedded into them.

Instead of these domestic items being used for what they were designed for, such as cleaning, cooking, and gardening, Watts crafts them into mesmerizing sculptural performances.  For instance, a roll of kitchen paper through the artist’s actions becomes a two-metre long spiral made of a hundred and fifty continuous connected squares free standing on their edge. Once the final square is unfurled Watts knocks the last square down, which leads the other squares in a wafting down motion. By now, the audience have forgotten they are watching simple kitchen towel and the day-to-day tasks carried-out with it.  Instead they captivated by the beauty of the moving sculpture.

‘[she] continues to explore issues of perception and reality, as well as, aspects of individual physicality under pressure’ – The Herald

Lisa Watts is an English artist who uses various media such as performance, video, photography, and digital imaging in her art practice, which often involves her own body.

She showed her first performance work, the acclaimed Breadmaking, (1990) at the National Review of Live Art, Glasgow. She then went on to show performance work such as I Never Made It as a Sex Kitten (1993) at Serpentine gallery, London, Bluecoat Gallery, Liverpool, The Root Festival, Hull Timed Based Arts, Hull, Tramway, Glasgow, Prema Arts Centre, Gloucestershire, The Greenroom, Manchester. As well as Grassmonsters (1990) in Dublin, Ireland, Hamburg, Germany. Her film Bun (1997), made collaboratively with Sussanah Gent, has been a great success and been shown globally including Eat my shorts film festival, Canada, Bombay, India, Mexico, and it has been broadcast in Spain, Italy and France. Channel 4 made a short documentary about her digital photographic work, titled Muscles, (1998).

Lisa Watts is grateful to Staffordshire University for funding she has received towards Not a Decorator.