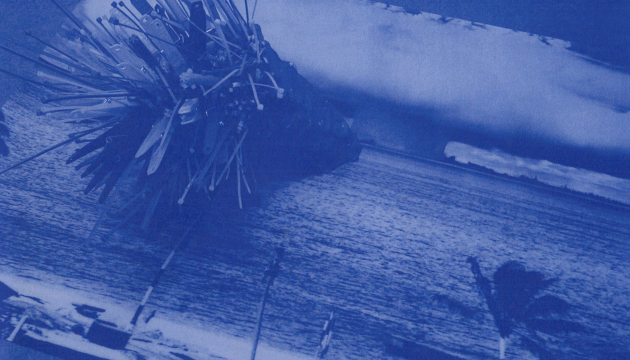 Laura White: If I Had a Monkey I Wouldn’t Need a TV

White is interested in the idea of a haptic experience in relation to imagery, where one has a physical relationship to an image and encounters them through a sculptural language. By representing images in this way the viewer confronts the image both physically and spatially, inviting them to dissolve their subjectivity in close and bodily contact with the image.

Within a language of sculpture White explores the sculptural qualities of images, such as using image as matter, sculpting it to create complex and colourful forms that both displace and destroy the meaning of the image. For example, physically manipulating images by projecting video onto assemblages of objects in a darkened space, so that the images literally wrap themselves around objects, or cutting images from magazines and using them as sculpting matter, like one would use clay or plaster to tear, crumple and glue into shape and form. This sculptural manipulation of images, explores a direct engagement with the audience, one that is both visceral and erotic, and plays with the relationship between representation and abstraction, as recognisable images are broken down into abstract form. The boundaries between image and object become blurred to challenge the viewers’ relationship to both, making it possible for images to exist as solid matter in the here and now, and objects to disperse into a mediated world of imagery.

White is interested the way we read human intervention and its control over nature. How nature through the frameworks we set up can seduce us and provide us with unthreatening pleasure and entertainment, like visiting an aquarium, a zoo or watching wildlife documentaries on TV. The process of visual engagement she creates by sourcing primarily photographic imagery of the natural world (still and moving), is then shattered by the viewers acknowledgement of the positioning, exaggeration and awkward arrangements and manipulation of these images, or the presence of objects in the space, which slowly reveal a less entertaining perspective, one that reflects and explores the manipulation of nature and its threatening instability, whether that be through human contamination, misrepresentation, dislocation, or nature’s ability without any human intervention to destroy.