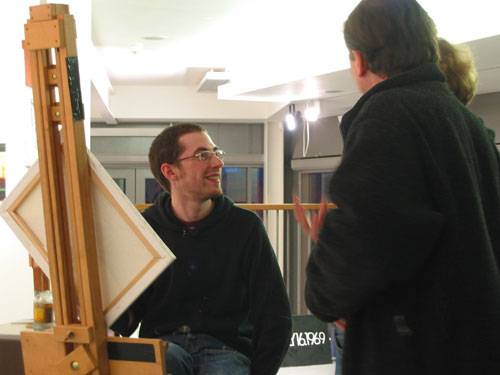 As part of the gallery’s ongoing commitment to exhibit emerging artistic talent The Project Space will showcase innovative and exciting work by artists from around the country. Running parallel to the main gallery programme, The Project Space will give artists the opportunity to show either new work, projects in development, or to create a body of work or site-specific piece as a response to the space.

Hutchinson would not class himself as a painter. For him, the act of painting is a way to immerse himself in a sustainable studio practice with its own set of internal rules. In order for the practice to prevail over the individual artworks Hutchinson produces copies of seemingly unrelated paintings thus diluting any potential meaning that emerges through the appropriation of any one image.

The unifying factor in Karaoke Paintings is the loss of the finer details which occurs on the journey from painting to printed matter to karaoke. The result is the viewer being left with what could perhaps be described as a sound bite of high art. In this ongoing and potentially infinite series the level of painterly skill has to remain at a constant (acceptable not exceptional). Therefore, the artist goes through regular periods of unlearning, in which he attempts to forget any practical discoveries he has made. The irony is that if Hutchinson actually became a decent painter the piece would fail.

Karaoke Paintings question authorship and postmodernism’s treatment of history whilst exploring the relationship between artist, artwork and audience.

James Hutchinson was born in Southport in 1976. He studied at Leeds Metropolitan University, Leeds. He produces work in a variety of media, including video, text and performative actions. His predominant concerns are what, how and why an artist creates and whether there is a role for the artwork itself in contemporary society. Recent exhibitions include: Free Artworks (solo exhibition), The Bassoon Club, Manchester (2002); Less is a Bore, Humans Need More, The Mission, London (2002); New Contemporaries 2001, Camden Arts Centre, London and Northern Gallery for Contemporary Art, Sunderland (2001) and Bloodstream, Islington Mill, Salford (2000). James Hutchinson lives and works in Manchester.