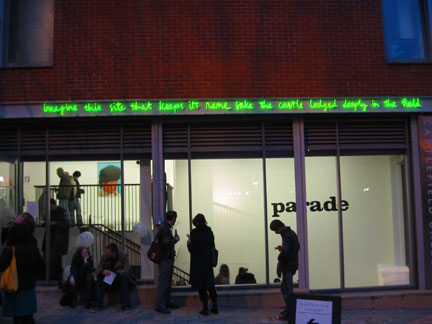 ‘In The Field’ – Sarah Waring

Castlefield Gallery is proud to present new work by Sarah Waring, commissioned to celebrate the gallery’s 20th anniversary in April 2004.

Much of Waring’s work centres around the mapping of places, objects and time. She focuses on details and fragments – the name of a shop, the corner of a picture frame – which are then pieced together to form new narratives. A context is thereby created for what is otherwise commonly overlooked. Waring’s work is also often informed by site specificity and an interest in working in the public domain, which has often resulted in the making of many small objects, texts and images that collectively reach a lot of people.

‘In The Field’, a site-specific, exterior, neon text artwork, was inspired by the gallery’s name and location. The piece reflects the Castlefield Gallery as a contemporary art venue and its relationship to local cultural heritage. The term ‘Castlefield’ originates from the area’s Roman fort built in AD79. A ruin by medieval times, the fort had diminished in size and from view. It became known by its description as the ‘Castle-in-the-Fields’. Over time shortened to Castlefield, the word, like many names, still evokes images from its nouns. With most of the ruin long gone the name has become its signifier, open to further interpretation.

The process of mental visualisation readily conjured up by the words ‘Castle’ and ‘Field’, and their ability to evoke a place beyond memory, inspired the phrasing of this neon piece. In its entirety the phrase reads: ‘imagine this site that keeps its namesake the castle lodged deeply in the field’. The words can also be read in two other ways when the neon text flashes through three sequences, isolating certain sections of the phrase; the flickering producing residual images not unlike the retention or recall of a past time and place through words.

Based on Waring’s handwriting, the sign reads like a personal message, encouraging individual mental images from its viewer.

Sarah Waring was born in 1971 and studied B.A. (Hons) Fine Art at the University of Humberside. In 1999 she completed M.A. Fine Art Photography at the Royal College of Art, London.

Waring is also co-founder of ‘Prawn Publishing’ an artists’ partnership working with other organisations, such as the South London Gallery, ‘Everything’ magazine and ‘Hoax’ at the Lux Gallery, translating corporate language and conventional printed media into more accessible, interactive and intimate forms. Sarah Waring lives and works in London.