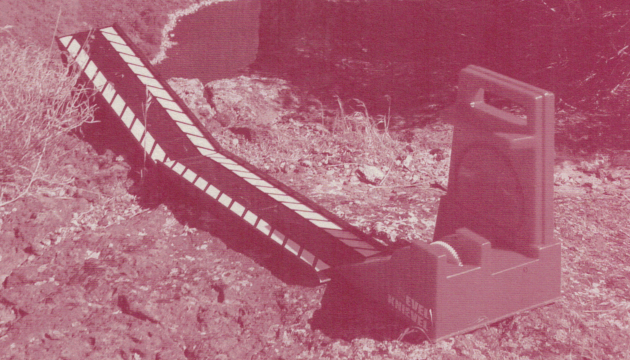 Gordon Dalton & S Mark Gubb: Everyone Knows This Is Nowhere

After landing in Los Angeles, California, the non-collaborative duo set off on a 2-week road trip hoping to reach their final destination of Snake River Canyon, Idaho. This gaping chasm is famous for the gloriously failed attempt by Evel Knievel to jump the canyon.

Sun-kissed and script less, Dalton & Gubb were on a search for defining points in their overly nostalgic, sentimental shared cultural history. For the first time, the pair will try and tell the truth, or at least a version of the truth.

Two men. Two cameras. One car and a pocket full of gas money; a road-trip in to the frail consciousness of a nation obsessed with success. Two people exploring the role of the artist, the artist as (anti)hero and their personal relationships with American culture and history; both the culture and politics of today and the aspirational, superstar culture of their youth. A pilgrimage to engage in an impossible dream and the inevitable crash down to earth, both physically and aspirationally.

‘Follow your dreams, no matter what they are or you’ll never amount to anything. It’s better to take a chance in life than to never take a chance. I’m not saying to go and jump a canyon, but you have to take chances. Next time, I’ll take more’. Evel Knievel

This exhibition is the third in a series of (un)collaborative projects/exhibitions between Gordon Dalton & S Mark Gubb, the other two being ‘The Battle of Forest Hills’ (Moot Gallery, Nottingham) and ‘Radio, Radio’ (National Museum of Wales).

Gordon Dalton, born in Middlesbrough in 1970, is an artist, writer and curator. Early curatorial projects include Strange at Vane, Newcastle (1998), We Interrupt this programme, Changing Room, Stirling and Waygood Gallery, Newcastle (2002), Masters of the Universe at Chapter, Cardiff (2003) and Ain’t no love in the heart of the City (CBAT Gallery and public sites throughout Cardiff). More recently, Dalton curated Another new Babylon (CBAT/public sites, Cardiff) and Things we lost in the fire, Transition Gallery, London (2006).

Upcoming exhibitions and projects for 2008 include a group show at Bank, LA and a solo show at Keith Talent, London. He lives and works in Cardiff, where he is co-Director of Mermaid & Monster, a new contemporary art agency. He is represented by Keith Talent Gallery, London.

S Mark Gubb grew up in a seaside town, spent the ages 6 to 16 growing up through the 80’s and his cousin introduced him to Iron Maiden when he was 8 years old. He works across a range of media including sculpture, video, sound, installation and performance. The subjects for his work are drawn from the social and political culture he grew up in; an equal fascination with things he finds so great and so terrible about the world we live in.