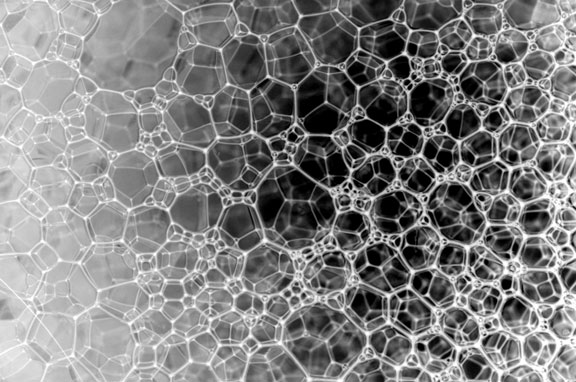 “Apparently you can perpetuate the existence of a bubble for as long as two years. I managed 20 minutes so far.”

Antony Hall is interested in the laboratory as an environment of continual surveillance, and the meditative potential of scientific methodology. His work is concerned with locating behaviours and developing control structures [devices], within which certain unique, special events can exist – purely for the purpose of observation. He explores notions of durational experimentation, slowness, and perpetuated expectation, generating the tiniest, most intimate and intricate phenomena possible, contrasting to the industrial scale of the laboratory.

The title of Hall’s Project Space, ‘Experiments With Soap Bubbles,’ is derived from one of the books which forms the base of his practice – his copy of the 1911 reprint of the book ‘Soap Bubbles & the Forces Which Mould Them’ by C.V. Boys.

During his time in the Project Space Hall intends to recreate some of the classic experiments from C.V. Boys’ book, alongside exploring the work of Maarten, Rutgers, and John Choma; the aspects of contemporary scientific research which inform his current practice.

Hall will be resident in the Project Space every Thursday and during some weekends. This is subject to change. Please telephone the gallery or check the website to confirm times.

MORE ON ANTONY HALL:
Antony Hall completed the MA Art As Environment at Manchester Metropolitan University in 2002. He has exhibited widely both nationally and internationally; recent solo shows include ‘Fluid’ at Mission Gallery, Cardiff and The Chapman Gallery, Salford.

Hall has also undertaken many residencies. Current projects include; Research Artist for ‘Alchemy’ at Manchester Natural History Museum; CAPE UK/NESTA Creative Space project, working with science teachers in schools to find new and innovative ways of teaching science; LAB Arts Catalyst/Creative Partnerships, art science project; and Artist in Residence on the AIR Project at UMIST, a program where artists can undertake research and production projects in collaboration with scientists and engineers, or respond to ideas associated with science, and engineering.

Hall also forms one half of ‘The Owl Project’ – a performance and sound collaboration with artist Simon Blackmore. Antony Hall lives and works in Manchester.

The Project Space is generously supported by The Granada Foundation.