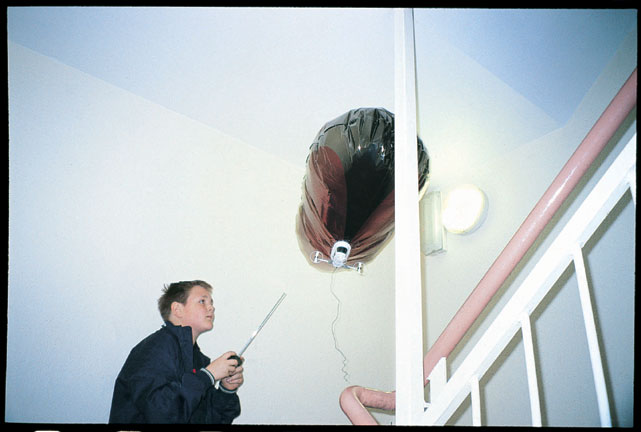 Aside from the gallery space proper and the now almost as ubiquitous warehouse/post-industrial space, artists and curators have always found idiosyncratic alternatives to the current models of exhibition spaces.
Leo Fitzmaurice and Kirsten Lavers have both engaged in extended explorations of this area of practice by setting up gallery projects in unusual spaces.

Leo Fitzmaurice is an artist and co-organiser of ‘Furthermore…’ an artist led project developed from ‘Further up in the air’ based in the North Liverpool community of Sheil Park. In these projects 25 national and international artists came to live and work in a 22-storey tower block. Fitzmaurice also previously developed an artist led project ‘All in the Mind’ based in an abandoned psychiatric hospital in Cheshire.

Laver’s Taxi Gallery is a two-year project, ending next summer, to produce artworks responding to and sited in a decommissioned Hackney cab in a front garden in Cambridge. The final project will be a permanent commission.

As part of a day of discussions around models of practice they will be exploring the ways in which they have engaged with, and asked their collaborators to engage with, a specific non-gallery environment.

MORE ON LEO FITZMAURICE:
During 2004 Leo Fitzmaurice has undertaken a residency at Vitamin Creative Space in Guangzhou China. He has also shown his work at Sainsbury Centre for Visual Art, and been in several group shows including ‘On Side Centro De Artes Visuas’, Coimbra, Portugal and ‘Inter’ at Harris Gallery Preston. He currently has work on show in John Moores 23 at the Walker Gallery, Liverpool, and the ‘Further up in the air’ project is represented in Shrinking Cities, Kunst Werke, Berlin. In December Fitzmaurice’s work will feature in ‘Slim Volume’ Redux, London. Future projects he is involved in are ‘Size Matters’ an Arts Council Touring Show in 2005 and ‘Make Your Own Damn Art’ a group Show at Manchester Art Gallery in 2006.

MORE ON KIRSTEN LAVERS:
Kirsten Lavers is an artist whose practice includes curation, collaboration, participation and contextual response. One of her current projects is Taxi Gallery, literally a London taxi cab situated in a council estate on the outskirts of Cambridge. Each month a different artist is invited to make new work in response to the specific context offered by the gallery and its location. Through Taxi Gallery Kirsten is proposing a model of practice that involves other artists within a framework constructed by herself. A framework that reaches for an extended (over time) conversation with both local and translocal audiences in response to a broad range of challenging contemporary artworks, approaches and ideas.