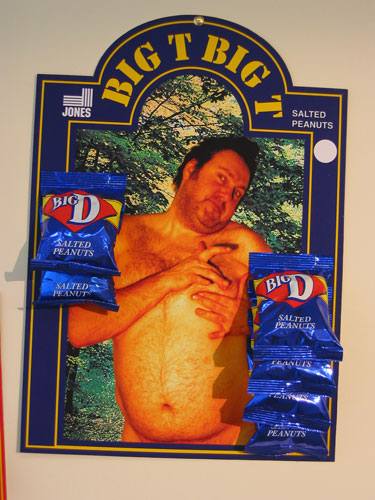 “Dog & Partridge” explores the relationship between the country and urban public house and the issues that effect the traditions and aesthetics of these environments.

Castlefield Gallery exclusively presents a series of new and commissioned works for the exhibition. These include “Shepherd’s Call” by Alan Birch, recreating the traditional pub sign using a subtle computer generated montage of the media portrayal of the foot and mouth crisis. Birch’s work deals with the survival of country life and the ideals of the countryside when appropriated and transported to the city. Further commissions include ‘Virtual Society’ by Tim Jones – a TV depicting a pub scene with a TV depicting a soap-opera pub scene, plus the installation “Private Function” recreating the atmostphere experienced on the other side of the Function Room door. Jones also collaborates with furniture designer John Male on “Lager Top”, a pub table with a real beer surface as its veneer.

Male exhibits other works of design which fuse the contemporary with typical English heritage whilst referencing football and drinking ‘lad’ culture.

Fiona Curran shows new paintings which represent decorative styles and motifs from Baroque and Rococo wallpapers and fabrics that became synonymous with the flock wallpaper used in the traditional pub. This aesthetic also informs Jonathan Carson’s curtained window installation that reveals the intimate thoughts of people, found in the words he scribbles across them. Carson alludes to the paranoia enhanced by alcohol; the illogical conversations which can lead to pub brawls.

Dawn Woolley presents fictional snapshots of ‘authentic’ pub scenes that deal with her fascination with the function of gender in day-to-day life. The work sees the artist in many guises portraying her often humourous observations of gender stereotypes and the drunken interactions of the ‘hunter’ and the ‘hunted’.

And finally, the ideals of a bygone era are evoked by both Martin Vincent and Jim Medway. In Vincent’s “The Wedding Present “ he produces a cross-stitched text piece which informs you ‘You’re Throwing Your Life Away’ – an all too common phrase echoed in pubs across the land. Medway displays a fox cub dressed in a traditional William Morris fabric coat; a sobering reminder of the victims of the hunter, whose existence or extinction depends on the survival of the traditions of an English country way of life.